The boyfriend of reality star Gia Allemand got emotional discussing her death during an NBA media day. 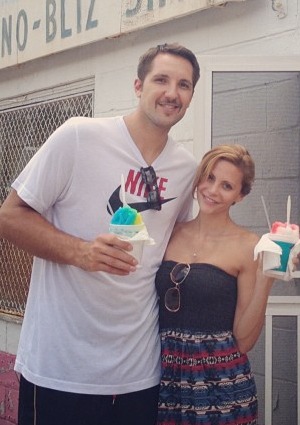 He found her lifeless body after a frantic phone call from her mother — and now Gia Allemand’s boyfriend is trying to find a new normal in his life.

NBA player Ryan Anderson discussed the reality star’s tragic suicide and how he is slowly trying to piece his life back together during a media day for his team, the New Orleans Pelicans.

“Every day is a challenge,” Anderson explained. “It helps to be here. My family’s with me. To be here with my teammates really helps a lot. But it’s a roller coaster. Yeah.”

Anderson, who reportedly fought with Allemand about her suspicions he was cheating on the day of her death, said that his strong religious faith has gotten him through these dark weeks after Allemand took her own life.

“I praise God every day to have him in my life,” he said. “It would be very very hard to get through these steps if I didn’t have him, if I didn’t have God and Jesus Christ in my life. He has made every single step… you know when you’re thinking about something or preparing about something and it’s a lot, it seems a lot more difficult, and then you go through it, you overcome it, and kind of each step of the way has sort of been like that.”

The basketball player also revealed that Allemand’s legacy will live on in the form of helping others avoid the same fate.

“Something like that just doesn’t happen for no reason, and I know that there’s a huge plan here,” he said. “A lot of people are going to be helped from this. And we’re in the process of starting something great for her with her family, including my family, too. We have a huge plan to do something great, great in her name that’s going to help a lot of people.”

“That’s what I want to be my goal here. To have everybody here know that they’re not alone. Whatever you’re going through in your life, you’re not alone.”