Miley Cyrus’ new MTV documentary is supposed to showcase her career and talent, but it’s hard not to focus on the things that will not be appearing, like her ex-fiance Liam Hemsworth. 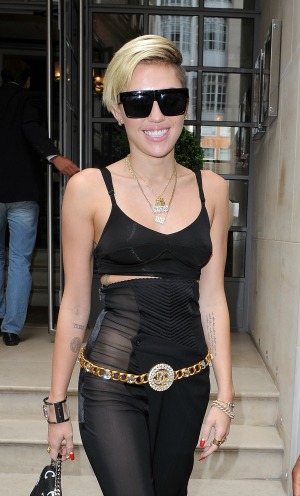 In case you thought the last couple of months had taught you everything you could possibly know about Miley Cyrus, it looks like you were wrong. Cyrus’ MTV documentary will debut Wednesday, Oct. 2 and they will delve into the singer’s life — but not all of it. Her ex-fiance Liam Hemsworth is apparently nowhere to be found during the hour-long doc.

“We just decided to focus on the music and professional side,” said executive producer Dave Sirulnick. “We were not doing a documentary about anything in her personal life.”

Cyrus and Hemsworth called off their four-year relationship earlier this month. But while the documentary was filming, they lived together. An absence of Hemsworth makes sense if it was planned, but according to Yahoo, the fact that Hemsworth isn’t in any of the scenes filmed in their home may hint at problems in the relationship well before they finally ended it.

Pharrell Williams makes an appearance in the film and told MTV, “The world thinks that they know this girl, but my thing to you is, don’t be fooled.” Williams is a fan of Cyrus, and is the one who reportedly told her it was alright to chop off her hair.

Other people making an appearance in the documentary include Mike Will, Cyrus’ Bangerz producer, and Britney Spears.

Tish Cyrus will be making an appearance, but Billy Ray Cyrus will not, offering a little more hope that they truly wanted to leave her personal life out of the film.

You can also see Cyrus in this month’s issue of Rolling Stone.

Miley: The Movement will premiere on MTV Oct. 2. Her new album Bangerz is out Oct. 8.