It’s been four whole seasons of hookups and breakups on The Vampire Diaries with more to come, no doubt, as Season 5 ramps up. Here are the best and worst relationships thus far. 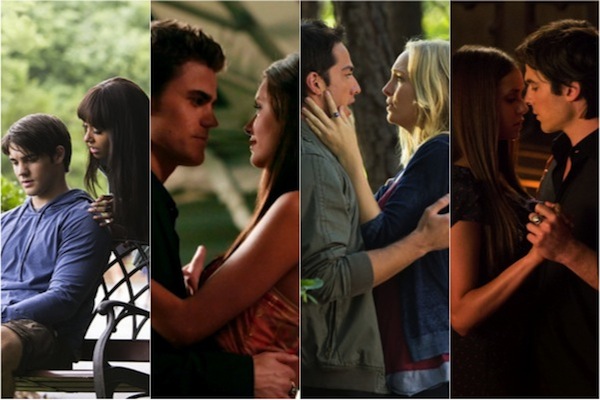 The Vampire Diaries is known for its love triangle, but it’s far from the only relationship on the show. In fact, most of the characters seem to have history with one another. But who makes the perfect match, and who are the character that we never want to see kiss again? Here’s our take:

This was the relationship that started the show. Remember back to Season 1 when Stefan (Paul Wesley) and Elena (Nina Dobrev) were first learning about each other? She was so young and innocent, writing away in her diary. It’s easy to miss those days of simplicity, before Elena was a vampire. The nostalgia makes us wish we could watch the series from the beginning with new eyes.

Okay, so he’s moved on to his own show, and we have to just get over it, but Klaus (Joseph Morgan) and Caroline were nearing something great. The banter between the two made for such a great slow burn. Too bad The CW devised a spinoff before anything could actually develop. Now Caroline has moved on to upper classmen, and Klaus is after a different blond on The Originals.

Finally, finally, finally! After waiting and wanting these two together, it has finally happened. Now the key will be making it last past Season 5. Stefan’s out of the coffin, and Elena’s sensing his emotions, which could cause some relationship issues. She’s vowed not to let Stefan come between her and Damon (Ian Somerhalder) but is this a promise she can keep?

We never saw this relationship coming until it slapped us in the face. And then we realized it totally made sense. And, okay, things are complicated now that she’s dead, but we somehow have faith they’ll make it through. He is, after all, the only one who can see her.

We were going to say Alaric and Jenna but, let’s be real, Damon and Alaric is where it’s at. Why, oh why, did Alaric have to die? The two of them had some hilarious moments, and Alaric knew how to bring Damon out of his shell better than even Elena. These two were bromance at its best.

Just break up already! They haven’t really been a couple for a while now. Okay, so things with Klaus didn’t really pan out in the long term and now she’s got Jesse. All the while, Tyler is hanging above her head. Any good friend would tell her to ditch the guy and move on. It’s time, Caroline. It’s way past time.

We know they had to set up the premise for The Originals… but yuck! These two are like oil and water. Together, it just isn’t happening. That steamy one-night stand came out of no where! We’re glad it doesn’t look like they’re trying to make this work for The Originals.

We’re grateful for Katherine because it means the Salvatore brothers will forever look like statuesque gods, but link her romantically with anyone and we want to gag. She’s the definition of high maintenance and manipulation. Thank goodness Stefan and Damon came to their senses and can barely stand the sight of her anymore.

Sure he swooned after her, and she tried to give him a chance. Thankfully, they realized pretty early on it just wasn’t happening. We like Matt much better as Jeremy’s loyal sidekick. Though this whole gypsy thing is really putting Matt back in the spotlight this season.

Oh Vicki. She was bad news all around, teen angst to the extreme. It’s hard to remember back to Season 1, but Jeremy Gilbert wasn’t always so tall and broad. It took him a while to grow into himself and take the show as one of its leading men. Now he’s got that confident attitude, with his genuine heart and killer smile. Vampire hunter looks good on him. Vicki did not.

Which couple from The Vampire Diaries is your favorite? Do you think Elena will end up with Stefan or Damon?