Lorde is quickly rising to the top of the pop charts, but is staying mostly a mystery. She will be lending her voice to The Hunger Games: Catching Fire soundtrack. 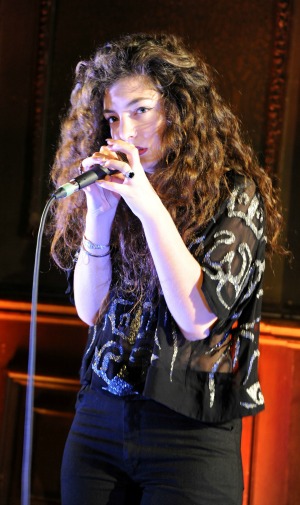 The full artist listing to The Hunger Games: Catching Fire soundtrack was revealed last week, and 16-year-old singer Lorde was a surprise addition to the album. But the song she will be contributing may end up being the most surprising part.

MTV confirmed that Lorde will cover Tears for Fears’ 1985 hit song “Everybody Wants to Rule the World.”

While the song may not be the most obvious choice for the Hunger Games series, the theme — simply, that everybody wants to rule the world — will fit in perfectly with the second film in the series about living under an oppressive government and wanting to do something about it.

“The concept is quite serious — it’s about everybody wanting power, about warfare and the misery it causes,” Tears for Fears’ Curt Smith said about the song back in 1985.

The soundtrack to Catching Fire, easily one of the most-anticipated movies of 2013, is looking to become a star-studded album. It will also include songs from artists like Coldplay, The National, Christina Aguilera and Of Monsters and Men.

Lorde, whose real name is Ella Yelich-O’Connor, seems to be playing along the theme of power. Her song “Royals” hit the number three spot on the Billboard Top 100. The singer has quickly made an impact on the world of music. She appeared on the cover of Billboard in early September, and spoke in a way that Katniss Everdeen could relate to.

“I feel like mystery is more interesting,” Lorde told the magazine. “People respond to something that intrigues them instead of something that gives them all the information — particularly in pop, which is like the genre for knowing way too much about everyone and everything.”

The singer previously covered another ’80s song, The Replacements’ “Swinging Party”, and spoke of her love and respect for a good song, whether or not she wrote it.

“As soon as I heard the song it was so powerful lyrically. It’s so beautiful and everything is a little bit tongue-in-cheek,” Lorde told MTV News. “It feels so sad as well. I love that. If I had written the song, I would be a very happy woman. I had to cover it.”

Lorde’s album Pure Heroine is out Monday, Sept. 30. The Hunger Games: Catching Fire will be out in November.

In case you need a reminder, here is Tears for Fears’ 1985 song.