Pamela Anderson is on the move, but instead of on the beach, it’s at the New York City Marathon. She’s trying to raise $500,000 for a good cause. 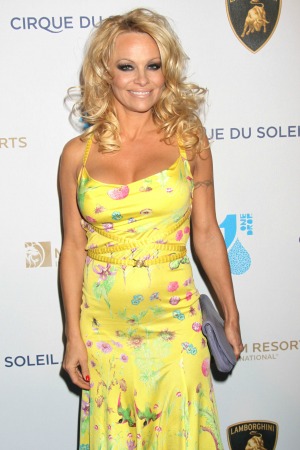 We’ve seen Pamela Anderson do a lot of running in slow motion on the beach during her Baywatch days. She’s putting all of that training to good use by running the ING New York City Marathon in November.

She announced the news via Twitter on Sunday which linked to Crowdrise, a fundraising website for charity. Her team is comprised of eight team members hoping to raise $500,000 for a great cause, J/P Haitian Relief Organization.

On her personal fundraising page, she wrote, “I’m running the New York Marathon this year and raising funds for the J/P Haitian Relief Organization. (Can you believe it?). Together, I hope we can raise at least $500,000 and make a huge impact in this magical country. I will give updates on my training too. Please scroll down to see why I’m so passionate about the cause.”

She then points out facts about Haiti including “poorest country in the Western Hemisphere,” “desperate need for things we take for granted-clean water, safe school structures, medical facilities” and “the opportunities are endless.”

The charity organization was founded by actor Sean Penn after the devastating earthquake in 2010 paralyzed the country. The Oscar-winner has been a hands-on part of rebuilding Haiti. Their mission is “to save lives and bring sustainable programs to the Haitian people quickly and effectively.”

Hugh Jackman: Back onstage for “one night only” >>

The actress praises Penn’s work on the Crowdrise site.

She said, “I have known Sean [Penn] a long time… I love him dearly. I think many people shine in Haiti. They Jumped. Took Action. Made the decision to help… What if we ALL had the nerve? I think deep down we all do… It feels good to help. And it heals us too.”

The grueling marathon takes place on Sunday, Nov. 3 through the five boroughs of New York City. Hopefully, Anderson is well into her training because 26 miles is a long way to run.

As of Monday afternoon, the blond star has raised over $8,000 for J/P HRO.