Miley Cyrus denies being pregnant with Juicy J’s baby, and she’s getting a big laugh out of the whole situation. 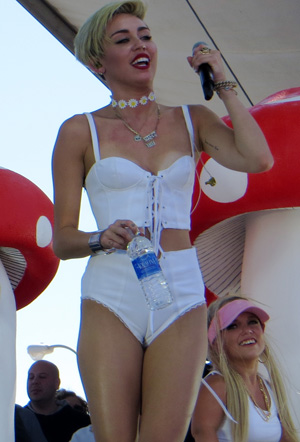 While she allegedly started the pregnancy rumor herself, Miley Cyrus is denying and laughing off the reports that began circulating early on Monday.

Apparently, when Cyrus was onstage at the BET Hip Hop Awards as a guest with Juicy J’s Three 6 Mafia group, the rapper joked about her dance moves. “I assure you she’s been doing a lot more than twerking!” he said to the crowd.

Yikes! Miley Cyrus is a hot mess in Las Vegas >>

At that, Cyrus announced that she and Juicy J were expecting a child together, and when everyone laughed she said in a would-be serious tone, “No, I’m really pregnant!”

However, as details of the show won’t become public until it’s broadcast on Oct. 15, nothing else surrounding the event with Cyrus was revealed.

But when the pregnancy issue hit the internet, Cyrus posted a tweet saying, “waking up to the news that I’m now pregnant with @therealjuicyj baby.” And while she poked fun at the rumor and sounded surprised, she didn’t mention her own statement about being pregnant while at the BET Awards on Saturday.

Cyrus shouldn’t really be taken aback at the flaming rumors after making a statement like that in front of an audience. However, just like many of her other stunts, like her scandalous MTV VMAs performance, this latest attempt for attention may have been totally planned and on purpose.

The controversial singer/actress has admitted to doing all kids of shocking antics in order to get people talking and to become memorable. Her VMAs performance was a “strategic hot mess,” she said in an upcoming MTV documentary, which will air on Oct. 2.

“That’s what you’re looking to do, make history,” Cyrus continued. She also added that the show “was meant to push the boundaries,” and take a spot as a historic moment in music along industry icons such as Madonna and Lady Gaga.