Twilight beauty Ashley Greene got rumors swirling when she stepped out with a new man and a big sparkly ring on her finger. 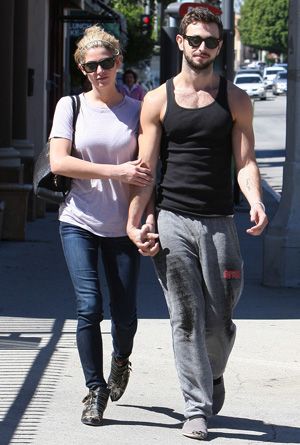 Ashley Greene was seen over the weekend walking around Los Angeles with a new man and a shiny ring on her left finger, which, no doubt, kick-started the inevitable engagement rumors.

The mystery man Greene was spotted with is now confirmed to be model Paul Khoury, the same hottie Miley Cyrus was seen in a car with back in March of this year. Incidentally, when Cyrus was photographed with Khoury, her own engagement ring from her then-fiancé Liam Hemsworth was missing from her finger. However, the two were said to be just friends.

Greene and Khoury looked happy and relaxed together as they made their way to Vivian’s Cafe on Sunday. While the Twilight actress looked casual and chic in jeans, her boyfriend (or fiancé?) looked even more casual sporting a pair of very dirty sweats and grey slip-on shoes that were full of holes.

The couple has been dating for a while, although it’s not known for exactly how long. But according to an E! News source, Greene’s ring is not of the engagement type, even though it looks just like a big diamond gloriously sitting on her left finger. Go figure.

Meanwhile, Greene and her new man have been posting Instagram photos of themselves having fun at parties and in Las Vegas together. One of the photos is of the pair along with a friend, which Khoury captioned with: “We owned the night. Doing it big with two very special people in my life. #vegas #epicweekend.”

Prior to pairing up with Khoury, Greene had other high-profile relationships, including one with Joe Jonas. The actress and boy-bander went out for almost a year before calling it quits. While they dated, Greene and Jonas shared lots of affectionate public appearances together and claimed to be crazy about each other.

The happy-couple-no-more broke up in March of 2011.