Oprah’s network is filming Lindsay Lohan to tell a story of redemption and a return to Hollywood. But for that story, the drama of her family will not be included. 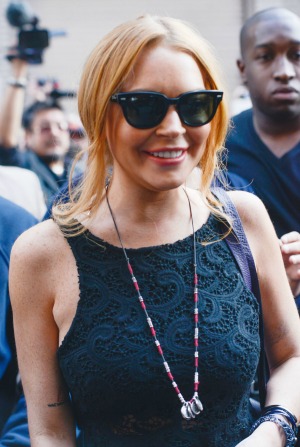 Oprah isn’t looking to create another Keeping Up With The Kardashians-type show, and has reportedly banned Lindsay Lohan‘s parents from her new show.

Lindsay Lohan: Back to work and getting rave reviews >>

Oprah gave Lohan her own reality show on OWN, but the producers apparently had no interest in her constant family drama, according to TMZ. The show will focus only on the 27-year-old’s “recovery and attempts to resuscitate her acting career,” according to the New York Daily News. An “executive decision” was then made to implement the ban.

Lohan’s parents have had as many, if not more, problems than she has. But that’s not what OWN is about. Dina Lohan was recently arrested for a DWI, and it looks like the show won’t even make mention of the incident. Always the role model, her mother has reportedly been partying with Lohan since her arrest.

The producers of the show want to promote Lohan’s story of redemption and her return to Hollywood. According to TMZ, the decision wasn’t an easy one, and was only made a few weeks back. Lohan was filmed with her father Michael Lohan numerous times, but it’s not clear whether that footage will be used. They’ve decided not to film anything with either parent in the future.

As for Lohan, she’s out of rehab and appears to be doing well. She was reportedly dating football player Matt Nordgren last week, but it looks like he’s just a good friend who’s stuck with her through thick and thin. She’ll also be starring in Eastbound & Down, and there are reports she may be in talks for her own HBO show as well.

Lindsay Lohan’s OWN show will be an eight-part docu-series airing in 2014.