Katy Perry reveals some emotional lyrics in her upcoming album Prism, which deals with her devastation and suicidal thoughts following the end of her marriage to Russell Brand. 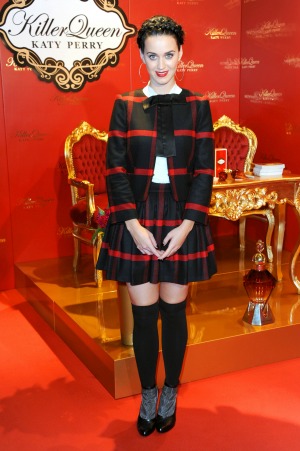 Perry references her divorce in her lyrics to the song “Ghost,” which read, “You sent a text… It’s like the wind changed your mind.”

The singer has since revealed that she went through a very dark time following the end of her 14-month marriage. In fact, the Roar hit-maker was so heartbroken that she even questioned whether she wanted to “continue living” without Brand.

While the world has eagerly awaited Perry’s upcoming album Prism, the tracks are not all upbeat and deal with some very deep emotions. The lyrics of one song in particular, “By the Grace of God,” reveal the singer’s thoughts at the time.

The powerful yet very emotional lyrics read, “Lay on the bathroom floor/Couldn’t take it anymore/By the grace of God/I looked in the mirror and decided to stay/Wasn’t gonna let love take me out/I thank my sister for keeping my head above the water/Every morning, I finally see myself again/Universe calling my bluff.”

Perry told Billboard magazine, “That song is evident of how tough it really was at a certain point. I asked myself, ‘Do I want to endure? Should I continue living?'”

“All the songs are real-life moments. I can only write autobiographically. I put all the evidence in the music. I tell my fans if they want to know the real truth about stuff, just listen to the songs.”

At least the brunette beauty has some positives in her life at the moment, one of which is that she has rekindled her romance with on-again, off-again boyfriend John Mayer, and Perry is clearly smitten.

She gushed about her beau to the magazine, saying, “He literally is a genius, as is evident from his songwriting.”

We are very glad that Perry’s dark days are no more.