Homeland‘s Season 3 premiere was, honestly, “just OK.” Spoilers ahead! (As well as a full recount of what happened and where we think it’s going.) 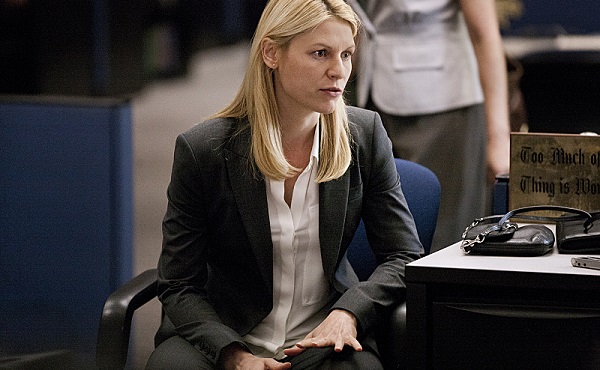 Sometimes you finish a show and find yourself leaning back away from your television to process what you’ve just witnessed. Tonight required quite a bit of processing for many television fans as, not only did they deal with the series finale of Breaking Bad, but they also stayed glued to their televisions for the Homeland Season 3 premiere. After critics butchered the entirety of Season 2, does this one promise any hope for something better? Maybe?

The premiere started slow and somewhat confusing. Picking up just two months after where Season 2 ended, we find almost everyone’s life is in shambles… except Saul’s.

Teaser: Here’s what the rest of Homeland Season 3 looks like >>

Saul (Mandy Patinkin) has been made director of the CIA and even his lovely wife has returned to be by his side after the attack on the CIA building, the loss of his former director (and many more co-workers) and the acquisition of this new title. That seems pretty far-fetched, though. She was so cold before, so I can’t imagine her caring about his emotional turmoil. If she did, she wouldn’t have left in the first place. Plus, she took major issue with his busy work schedule. Why would she come back now that he’s director? That can’t possibly mean less work. Plus, that scene in the bedroom was incredibly confusing. She suggests that it was Saul’s decision that they sleep in separate rooms and that he could change the situation if he wanted. Yet, when he takes her hand (as if to ask her to stay), she pulls away and leaves. WTF lady?!

Also by Saul’s side is Dar Adal who I don’t 100 percent trust. Actually, not true. I don’t even 10 percent trust him. Dude is shady. He definitely has it out for Carrie. Don’t ask me how or why I feel this way, but I think he’s involved in setting up Brody.

Everyone else, though, is seriously a mess. Carrie (Claire Danes) is predictably off her lithium, drinking heavily and hooking up with random strangers from the liquor store. Oh, and she’s on trial. Brody’s family is a mess, too. When we started the premiere, we found out Dana was in some sort of clinic for the last month after trying to kill herself. Now she’s sexting a boy. Not exactly earth-shattering teenage behavior (which is a really sad comment on our current society, but I’ll spare you the preaching). We’re definitely supposed to get the sense that Brody’s actions have greatly hurt his family. As if we couldn’t have guessed. Poor Quinn’s conscience takes a beating too when, after delaying setting off a car bomb because there’s a kid inside, he still ends up inadvertently killing the child later. That might have been the least predictable occurrence of the night. But, why was it necessary? Will we see Quinn tortured by this later in the season… or was it just for kicks? 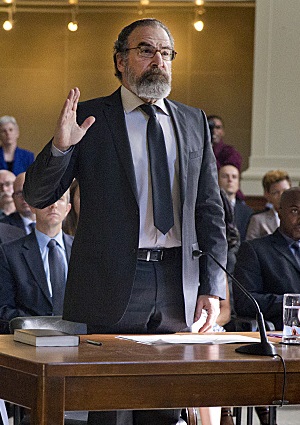 We also find out that the trial is more related to putting the CIA on trial and hopefully disbanding it than it is about actually finding the person who set the bomb or holding someone accountable. Congress and the clandestine service have serious beef. Meanwhile, someone from the CIA is leaking info to help take down Carrie… and possibly the entire intelligence agency. This whole storyline is interesting, but it mostly just has me concerned about whether or not this is actually possible. Could we just dismantle the CIA? Would this be a good or bad thing to do?

The most shocking aspect of the premiere came within the last few moments of the episode — just in time to keep me from dozing off. After a “source” reveals to the newspaper that an agent was in a relationship with Brody and Carrie goes apes*** on Saul, we see Saul going to trial. When he’s pressed for more info, Saul barely hesitates before rolling over on Carrie. He spills on her affair with Brody and her unstable mental health history. Not only is this a douche bag move, but it clearly sets up Carrie to be downright miserable and continue on her downward spiral.

For two seasons, Saul was almost like her personal cheerleader. Now he’s thrown her under the bus. So far, this plot twist seems so far out in left field. I get it: Saul’s trying to save the CIA. He’d rather lose Carrie than the whole agency? This is so unlike Saul. Sure, he’s a rather surly, slightly depressed dude. However, turning on his girl has never been his style. Not at all. If there isn’t some serious manipulation going on (most likely by our frenemy Dar Adal), then I think this is the worst idea for a twist ever as it seems to be completely out of character. It left me wondering what Saul was smoking or if he’d recently stopped taking his meds.

Between the premiere and the subsequent post-show Season 3 trailer, it seems that this season of Homeland will focus more on the hunt for Carrie than Brody. Saul has set her up to look like a major contributor to the attack on the CIA. It seems as though before the end of the season, a hit will be placed on her head. There was also a strange clip of Carrie and Mrs. Brody together. That’s a pairing I’m just not sure I can get behind without some serious convincing in the upcoming episodes.

I’m not sold on Saul’s abandoning Carrie (or the subsequent possible hit) and I’m incredibly leery of Dar Adal… and Quinn. He’s cute, but I’m still not sure about him. It was a slow start, but it set the stage for an interesting season of Homeland. Hopefully. Altogether I think we’re set up for what could be the recovery after last year’s fumble.

For even more TV news and show reviews, sign up for our newsletter >>

What did you think of Homeland’s Season 3 premiere? Did you have a hard time dealing with the slow pace, or do you think it was just right for getting you back into a show with so many twists and turns?