Disney’s heading Into the Woods with an all-star cast. The studio’s released a photo from the Rob Marshall musical featuring Oscar winner Meryl Streep. 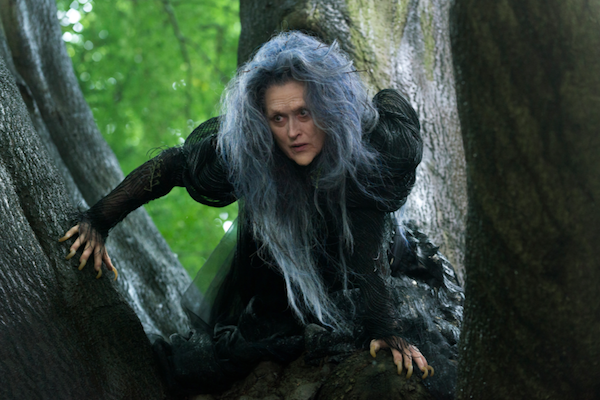 Fans of Stephen Sondheim and James Lapine’s musical Into the Woods are in for a treat. Walt Disney Pictures is producing a film adaptation starring Hollywood’s biggest stars. One of the most notable names attached is Meryl Streep, who’s barely recognizable in her role.

Ex-B&B cast member Mackenzie Mauzy in Into the Woods >>

Streep is at the center of the film’s first official photo. She plays a witch who’s obsessed with reversing a curse so that her beauty can be restored. She goes to some extreme lengths to make it happen. As you can see in the above image, she’s hiding in trees. That’s just not normal.

Casting news: Johnny Depp to go Into the Woods >>

The Witch was originally played by Bernadette Peters in the musical’s 1987 Broadway debut. The Into the Woods movie cast also stars Johnny Depp as the Wolf (from “Little Red Riding Hood”), Anna Kendrick as Cinderella and Chris Pine as her prince. The idea of Pine as a charming royal is enough to get us interested.

Into the Woods also ties in the tales of “Jack and the Beanstalk” and “Rapunzel.” They all complement the central story of a baker and his wife. The stage version is a favorite among theater buffs, so we hope the film lives up to the hype. With a cast like this, the sky is the limit.

Into the Woods is directed by Rob Marshall (Chicago) and opens in theaters Christmas 2014.

Will you be seeing Into the Woods next year? What do you think of Streep’s look?