A high-school student in Virginia got kicked out of school for wearing a silly Duck Dynasty T-shirt with one of the cast’s quotes: “I will hurt you physically and metaphysically.” 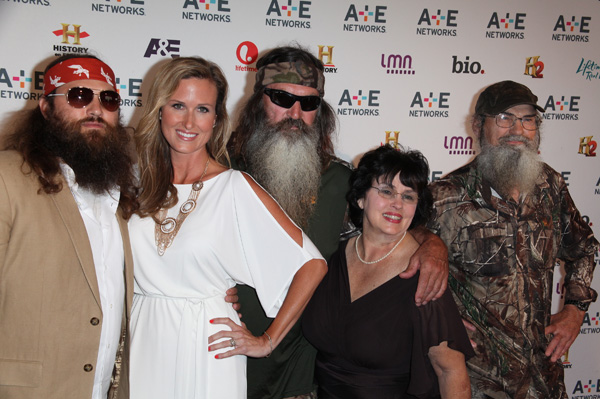 Duck Dynasty has become a super-popular show lately, but officials at Dinwiddie High in Virginia aren’t so thrilled about it. A student at the school was ordered to remove his shirt, which had a slogan from the show on the front, or go home.

The T-shirt worn by the student, a boy named Hunter Spain, depicted one of the show’s stars, Si Robertson, with the caption, “I will hurt you physically and metaphysically.” For those familiar with the show, Si is known for his silly catchphrases, such as the one on the shirt in question.

But the school felt the message on the shirt may be perceived as too violent by students not familiar with the show. “As a school division, we would like to keep our slogans on student shirts as non-violent as possible,” a spokesman for the school said.

While a bit embarrassed, Spain was not heavily disciplined, and decided to go home and get another shirt instead of taking off the shirt or turning it inside out.

“I’m not going to look stupid in front of all these young ladies in the school,” Spain joked. “So I decided to get a different T-shirt.”

The reality series, which revolves around a group of bearded duck-call entrepreneurs and their family, is known for its dopey humor. The quote on the shirt is just an example of what makes Duck Dynasty so popular with its viewers.

Meanwhile, Spain’s family is furious that the boy was told to go get another shirt. The boy’s mom, Edna-Joe Spain, said the shirt was a gift from his super-conservative grandma, who “wouldn’t even buy my daughter ripped jeans to wear to school,” the New York Daily News reported.

“For this to be considered as a threat to the school, I couldn’t understand it,” she added.