O.J. Simpson is in trouble again. This time the charges are for stealing from the prison cookie jar. Someone is a cookie monster! 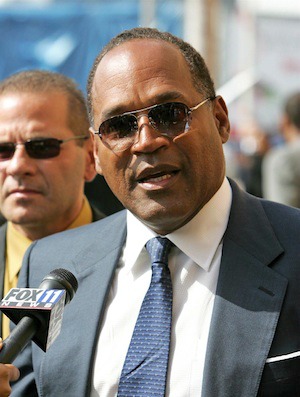 Just when you think he’s gone for good, O.J. Simpson jumps back into the headlines. He committed a crime in prison, but it’s not as bad as his previous charges.

According to the National Enquirer, Simpson is a cookie thief and he was caught red-handed by the prison guards. The former football great is currently serving a 33-year sentence for armed robbery at the Lovelock Correctional Center in Nevada.

The theft happened recently as guards noticed the shamed athlete looking a bit lumpy underneath his prison garb. He also appeared to be hiding something. That something turned out to be over a dozen oatmeal cookies, according to the Enquirer‘s source.

Not only is taking food out of the jail cafeteria forbidden, Simpson has been diagnosed with diabetes. His doctor has warned the 66-year-old to eat better and start an exercise regimen.

The insider revealed, “O.J. has been trying to diet since the doctors talked to him, but he loves sweets, and after a few weeks he couldn’t take it anymore.”

The whole incident went down with a few laughs, though.

Kris Jenner: I could have saved Nicole Brown Simpson >>

“Everyone thought he had smuggled in a cell phone or some other kind of contraband, so when the guard started pulling cookies out of O.J.’s shirt, the other in­mates started laughing so hard they nearly fell over,” the source explained. “O.J. just stood there with a goofy grin on his face as the guard kept digging in­side his shirt and throwing the cookies on the floor.”

Luckily for the former NFL player, the guards took a softer approach to the infraction.

The source said, “The guard told O.J. that he could be written up for cookies, but let him go with a warning not to let it happen again.”

Simpson kept in shape even after he retired, but his weight has crept up on him in prison. He’s reportedly up to 300 pounds and is suffering from high blood pressure in addition to his diabetes diagnosis.

It seems that the fallen sports star finds “the only enjoyment he has left in his life is eating his favorite foods.”

The source concluded, “To tell the truth, he really doesn’t care what happens to him anymore.”

The armed robbery charge is only one of his legal troubles. In 1995, he was acquitted of murdering his ex-wife Nicole Brown Simpson and her alleged boyfriend Ron Goldman. He began his current sentence in 2008.