He’s familiar with the reality show scene, but this time it’s for his health. Ruben Studdard is set to appear on Season 15 of NBC’s The Biggest Loser. 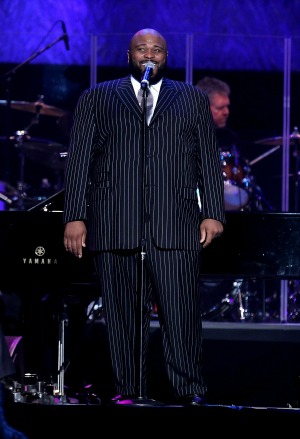 He might have been the Season 2 winner of American Idol, but things have changed for Ruben Studdard in the subsequent years. His weight has crept up to a hefty 462 pounds and he’s ready to take charge of his health.

The singer is set to appear on the 15th season of The Biggest Loser, premiering Oct. 8 on NBC. Studdard holds a record for the show this season: He’s the heaviest contestant to participate this year.

That’s not a title the 35-year-old wants to hold. The musician was so ready for his journey that he didn’t even have one last pig-out session before he began his weight-loss regimen.

Studdard told the Associated Press, “You know, the funny thing is, I was actually working the night before, so I didn’t get an opportunity to have a pig-out session, no. I actually flew from a concert to the ranch… I’m sure I probably would have had a piece of cake or something before I went up to the ranch for months and months.”

He’s already learned quite a few lessons since arriving at the ranch, one being prioritizing his personal time.

“I have to get up every day and give myself the two hours that I need to keep myself together before I even get into any music stuff, and that’s just going to have to be how I do it,” the reality star said.

Studdard is set to record his sixth album after the fitness show wraps later this year. He went through many transitions from the time of his AI win in 2003 to his latest gig with NBC.

On the personal front, he went through a marriage and a divorce. On the work front, he was dropped by several labels before signing with Shanachie Entertainment, who handled his fifth album.

The R&B singer is ready for a new beginning and perhaps a second reality show title.