Once a sweet child star, Miley Cyrus has done a gradual 180 and is now glorifying marijuana and bragging about her drug use. 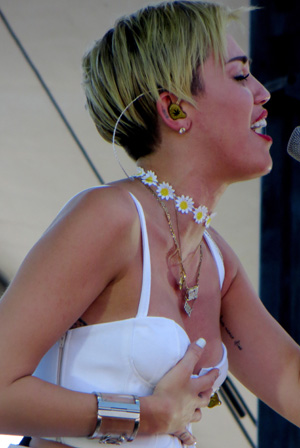 Miley Cyrus not only wants everyone to know how grown-up she is, she’s also gloating about her love for weed and other drugs. However, she does hate cocaine as it’s too “gross” for her mature taste.

In her much-talked about Rolling Stone interview, Cyrus spoke about a slew of subjects, and many didn’t make it to the printed page. But new outtakes from the piece have surfaced and they offer a ton of additional info.

“I think weed is the best drug on earth,” Cyrus said. “One time I smoked a joint with peyote in it, and I saw a wolf howling at the moon. Hollywood is a coke town, but weed is so much better. And molly too. Those are happy drugs — social drugs.”

Molly is the street name for Ecstasy, a drug often used within the dance-club crowd.

The “Wrecking Ball” singer added that she’d rather take drugs that make her “want to be with friends and not locked in a bathroom,” as is the case with cocaine.

VIDEO: Miley Cyrus is a mentor to Justin Bieber >>

In other parts of the telling interview, Cyrus spoke about her giant teddy bear outfits and how they make her feel like a creeped-out sexy baby.

“I had this obsession about this character that’s like an adult baby,” Cyrus said, as if inadvertently describing herself. “Like if you see a baby do something like that it’s so warped and weird, but there’s something creepily hot about it. So when I’m in that teddy bear suit, I’m like a creepy, sexy baby.”

Seems like the former Hannah Montana star has been hitting that weed way too much.

Cyrus also admitted to not having taken the year off as she had vowed to do, because she’d miss all the attention. “You’re so used to people calling your name,” she said.

Miley Cyrus gets “Rolling $tone” tattooed on her feet >>

“That’s why I never complain about people wanting autographs or pictures,” she continued. “Because if there were a few days where no one asked, I’d probably be like ‘What the f***’s going on? Do people not like me?'”

After these revelations, one can only imagine what Liam Hemsworth’s life was like for the past few months.