Prince William and Catherine, Duchess of Cambridge are the proud owners of a joint coat of arms, and it’s pretty amazing. 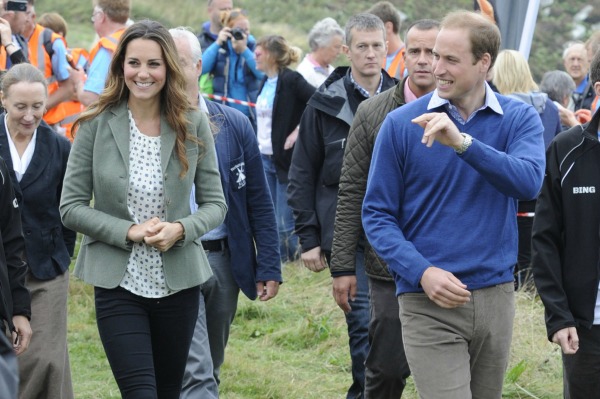 Kate Middleton has a cool new stamp to seal her thank-you notes. The Duchess and her hubby Prince William are the proud owners of a shiny new Conjugal Coat of Arms, and it’s pretty much the raddest royal accoutrement we’ve seen yet.

Featuring lions wearing crowns and a unicorn draped in garland on a grassy knoll, the Coat of Arms is like a scene straight out of Narnia.

“Designed by The College of Arms in London, Conjugal Arms traditionally show the separate shields of a Royal husband and wife, side by side,” the palace explained in a statement.

“The Duke’s shield on the left is his version of the Royal Coat of Arms granted to him by The Queen on his 18th birthday. On the right, The Duchess’s shield is from the Middleton family Coat of Arms, granted to the family in 2011 ahead of her marriage.”

“The Conjugal Arms will be theirs forever, however as their circumstances and roles alter, elements of the accoutrements around the shields may change,” the palace said, meaning that when William is promoted to Prince of Wales as Prince Charles ascends the throne, and when he gets the crown himself, the arms will be adjusted accordingly.

The symbolism within the Coat of Arms is fascinating. William’s “shows the various Royal emblems of different parts of the United Kingdom: the three lions of England in the first and fourth quarters, the lion of Scotland in the second and the harp of Ireland in the third.”

“It is surrounded by a blue garter bearing the motto Honi soit qui mal y pense (‘Shame to those who think evil of it’), which symbolises the Order of the Garter, of which The Duke is a Knight Companion,” the palace explained.

“The technical heraldic description of the Middleton Coat of Arms, known as a ‘blazon’ is Per pale Azure and Gules a Chevron Or cotised Argent between three Acorns slipped and leaved Or.”

“Per Pale means that the Shield is divided vertically with one half blue (Azure) and the other half red (Gules). A Chevron Or means the gold chevron across the centre of the Shield. There are cotises either side of the chevron which are white (Argent). Slipped means ‘with a stalk,’ so the final part of the blazon — and distinguishing feature of the Shield — means three acorns with gold stalks and leaves.”

“For its placement in the conjugal Arms, The Duchess of Cambridge’s shield is surrounded by a Wreath of Oak, to balance out the Duke’s garter. This is traditional for Royal Spouses who are not themselves entitled to surround their Arms with an order of chivalry,” the palace said, meaning that since Kate’s family are commoners they don’t get a fancy garter.

“Both shields are supported by The Duke of Cambridge’s Supporters of the Royal Lion and Unicorn wearing a three pointed collar, known as a label. The label has a red escallop shell derived from the Spencer Coat of Arms which has been used by The Duke’s ancestors on his mother’s side for many centuries,” the palace finished. Princess Diana leaves yet another legacy for her son.