We love mysteries and thrillers here at the SheKnows Book Lounge, which is why we’re bringing you David Bell’s third novel, Never Come Back, as our Red Hot Book of the Week.

David Bell, who should be a household name for crime fiction lovers, has written two mystery novels that are simply spellbinding. His debut, Cemetery Girl, features Tom and Abby, a married couple who have a wonderful 12-year-old daughter, Caitlin. They live a happy life until tragedy strikes: Caitlin never returns from a walk with the dog. Nothing can be more painful than losing a child… unless, perhaps, that child comes back, unrecognizable, wishing only to return to her captors and leave her parents behind once again.

Bell’s second novel, The Hiding Place, once again is about a disappearance, but this time it happened 25 years ago. Janet’s little brother disappeared one day when she was supposed to be watching him, and all these years later, she still feels responsible. A man was charged with his kidnapping and murder, but things aren’t as neat as that. One night, a man comes to Janet’s door claiming to have additional information about the case, and Janet is forced to reevaluate everything she thought she knew about the disappearance.

Now, Bell’s back with his third mystery, Never Come Back. While it doesn’t involve a disappearance or a kidnapping, it promises to be an intriguing and well-written mystery that fans of the genre are sure to enjoy. 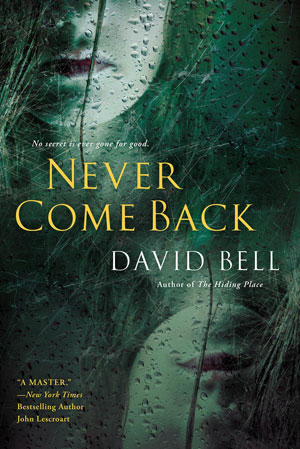 Elizabeth Hampton knew her mother would die eventually. After all, it’s something we all live with: the knowledge that our parents will likely predecease us. But when it comes, it’s so sudden, so unexpected, that it shatters her world. Elizabeth’s mother was the primary caregiver for Elizabeth’s brother, Ronnie, a man with special needs whose welfare Elizabeth is now responsible for.

But when Elizabeth discovers that her mother was strangled, everything shifts for her. The police are looking closely at Ronnie, assuming that he may have murdered her in one of his fits. But there’s more going on than even the police know about. Why would Ronnie attack his mother? Elizabeth has her doubts. But more than that, who is the woman — also named Elizabeth — named in Elizabeth’s mother’s will? Why has Elizabeth never heard about her, and could she have a motive for murder?

The twisted threads of this complex novel come together for the most explosive of revelations and family secrets.