Nicki Minaj is seriously proud of her lady lumps and flaunted them to families across America when she appeared on the set of The Ellen DeGeneres Show. 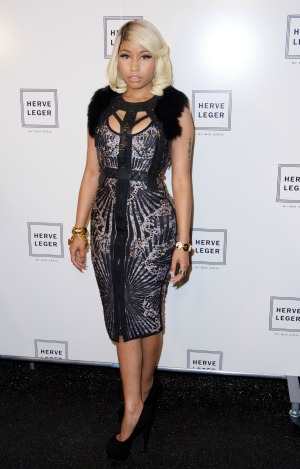 Nicki Minaj forgot her bra at home and experienced a serious wardrobe malfunction on set of The Ellen DeGeneres show, where she appeared to promote her second royal fragrance Minajesty.

While the rapper is not known for her conservative looks, this was one of her more racy appearances.

Ellen DeGeneres is always one to make an awkward situation lighthearted and was clearly in shock when she saw Minaj’s ensemble on her show.

DeGeneres commented cheekily, “Well, that’s quite a jacket you got on there,” to which the “Starships” rapped responded, “Don’t start.”

This was clearly an attempt by the hip-hop star to avert the attention away from her lady lumps.

DeGeneres was not ready to let the topic go and replied, “What did you mean don’t start? How can I not start on that? It’s very nice.”

Before she jokingly added, “Look, if you need to borrow a bra from me. You just let me know.”

Well, there is no chance of that, as Minaj revealed, “I hate bras… Bras are like the devil…”

Luckily, the former American Idol judge managed to avoid a boob slip during her appearance on the talk show! However, rather than be helpful and provide the rapper with a bra, DeGeneres decided she would instead offer her a custom made thong.

Minaj did not seem too concerned with her revealing appearance on the show and posted an image of herself on her Instagram account.

Followed by another image, that was captioned, “The last of the boob pics… Smile b****!”