Jimmy Kimmel is caught in Kanye West’s web of internet craziness, and the funnyman is spilling the deets on the irate phone call he got from Kim Kardashian’s baby daddy earlier today. 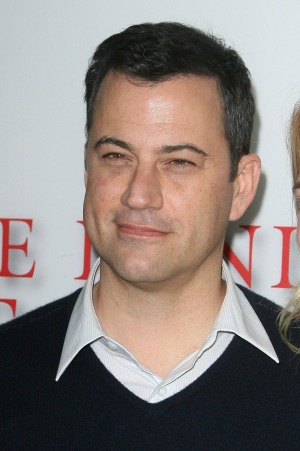 Kanye West went full caps lock on Jimmy Kimmel today after catching wind of a funny sketch on Kimmel’s show, and now the funny man has explained how it all went down.

And no, it was not a prank a la the twerking fail video.

“Did anyone else get a very angry phone call from Kanye West about an hour and a half ago? Just me? OK. I didn’t know if he was mad at all of us,” Kimmel said in his opening monologue.

“He is very angry because of a bit we aired this week,” Kimmel explained to the audience. “He gave an interview to the BBC, and we had a kid actor take the words and reenact it. We just had the kid say the stuff Kanye said. And apparently this upset him.”

“And that was really the only choice — the other choice he gave was my life… ‘your life is going to be much better if you apologize,’ and then he started tweeting today,” Kimmel said. “And I don’t even know if I’ve seen some of these because they’re happening as we speak.”

Kimmel then mocked some of Kanye’s Twitter posts, reading them aloud and giving his own commentary.

“‘Jimmy Kimmel put yourself in my shoes… Oh no that means you would have gotten too much good p**** in your life.’ I’ve seen the video. I know,” he deadpanned.

“‘Should I do a spoof about your face or you f***ing Ben Affleck…#NODISRESPECTTOBENAFFLECK #ALLDISRESPECTTOJIMMYKIMMEL!!!!’ Which, by the way, is a spoof,” Kimmel said. “I don’t know if he thought that was the news.”

“And by the way, he told me on the phone — and I swear to God this is true — ‘I am the most powerful voice in media. I am PAC.’ He said ‘PAC’ a few times to me. I guess he means Tupac,” Kimmel continued.

“He said, ‘You will never be able to show your face at a 14-year-old’s high school football game and be cool again!’ He really is Pac. I mean that’s right out of the Tupac playbook, isn’t it?”

Watch the video that set Kanye West off

Will Kimmel and West kiss and make up or will this become a rap feud of Tupac/Biggie proportions? Kimmel might want to watch his back; West does tend to get physical when his temper flares.