Zach Galifianakis is back at it with his online “talk show” Between Two Ferns. And the latest star to fall prey to his jokes is none other than the Biebs. 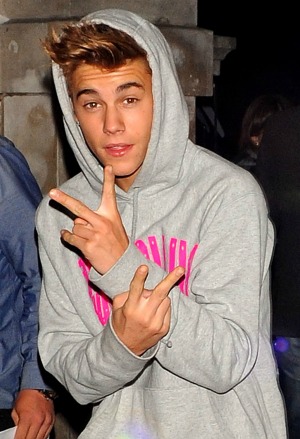 Funny or Die is at it again. The online comedy channel’s show Between Two Ferns with Zach Galifianakis has gained an Internet cult following, and his latest interview may be the best.

Galifianakis sat down with Justin Bieber for the interview and it appeared the two stars were not happy with each other.

The comedian started the interview by telling Bieber he didn’t know what to ask because he’d never “interviewed a seven-year-old before.”

Galifianakis took jab after jab at the singer, but asked him about important things too: like music.

“When you’re in a recording studio, do you ever think, hey, what if I don’t make something s****y?” Galifianakis asked.

He then asked if Bieber ever thinks of anything else while performing, and Bieber said sometimes he wished he was watching Cops instead.

Galifianakis also broached the subjects of Bieber’s recent slip-ups at the Anne Frank Museum, as well as being caught on video peeing in a bucket.

But Bieber did fight back. When Galifianakis asked, “You know what I was doing at your age?” Bieber quickly responded, “Finishing fourth grade?”

Justin Bieber’s naked serenade with nothing but a guitar >>

The highlight of the whole video came when Galifianakis took his belt off and began spanking the Canadian singer.

“You know what? I don’t like your attitude, to be quite honest,” Galifianakis began yelling at Bieber. “Because you know what? You’re too young to be smoking pot and peeing in buckets and driving up and down the highway fast! I don’t think your mom would really mind if a stranger whipped her son.”

Despite the brutal interview, Bieber was quite excited when it came out.

Between Two Ferns has hosted some of the biggest stars in Hollywood, including Jennifer Lawrence, Natalie Portman, Naomi Watts, Anne Hathaway and others, and Galifianakis doesn’t seem to treat any stars better others. He interviewed his Hangover co-star Bradley Cooper back in 2010, and treated him just about the same as he did Bieber.

Bieber tweeted earlier this month about working on a project with Funny or Die.

Whether or not the interview was scripted, Bieber played along like a good sport.