Call us fickle, if you must, but we’re always obsessed with something. Right now, it’s Lorde and her mission to overhaul pop music. 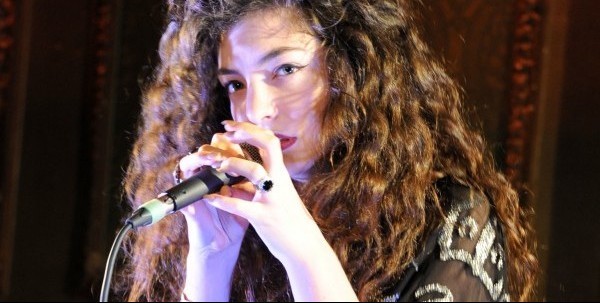 If you’ve sat in traffic at all recently and played a quick game of channel surfing, you’ve probably stumbled upon the genius of Lorde and her first hit song “Royals.”

It grabs you from the very get go and after just a listen, you’re no doubt hooked. It’s the kind of song that, halfway through your first time hearing it, you’ll almost rear-end someone because you’re taking a picture of your radio lit up with “Lorde — Royals.” You must remember to look into it later. You must go home and immediately add it to every. single. playlist.

There’s a reason why Lorde’s “Royals” is all over the radio and yet sounds unlike anything else played before or after it. It’s quite possibly the realest song out right now, which makes the self-aware lyrics 100 percent relatable… and incredibly easy to obsess over.

Lorde knows the world of pop culture is complete B.S. and she addresses that fact in her first single. Lyrics like, “But everybody’s like Cristal, Maybach, diamonds on your time piece/ Jet planes, islands, tigers on a gold leash/ We don’t care, we aren’t caught up in your love affair” prove her point. Pop and rap stars are making millions of dollars and wasting it all on stupid stuff we’d never even dream of buying.

For most teens, the price of a bottle of Cristal would be a down payment on their first used car. It’s ludicrous. We judge harshly the people covering themselves in diamonds and gold (or those not covering themselves at all). And yet we want it. As does Lorde when she sings, “Let me live that fantasy.”

What Lorde does brilliantly, though, is more in the way she delivers her message than what she’s actually saying.

Delivery is clear… then loud

Most people think the only way to get your point across is to be the loudest person in the room. Despite still working to earn her high school diploma, Lorde has already learned that the art of persuasion is all about delivery tactics. She understands the value of being clear, concise and even-tempered.

There’s nothing flamboyant about “Royals.” As a matter of fact, nothing she does is over the top. Despite the catchy beat and stellar harmonies, “Royals” is one of the quietest and most simple songs on the radio. That break from all the noise, though, is exactly what first caused the song to stand out and be heard. Admit it: You love the lyrics now, but it was the empty space coming through your speakers that made you first stop and listen. Also, is it wrong to say someone so young has a sensual voice? That certainly had to help, too.

Nearly everything Lorde does is equally as stark and alluring. It’s ready to stand out on the radio and in your memory.

Who is this marketing genius?!

Lorde is actually Ella Yelich-O’Connor. She’s 16 years old and hails from the beach town of Devonport in Auckland, New Zealand. Though she sings of those worldly charms, Lorde hadn’t even flown in a plane until rather recently. She still plans on finishing school, too. Though, she’s taken a bit of time off to tour in support of her upcoming album, Pure Heroine, which releases today, Sept. 30. It’s hard to find a picture of the teenager smiling, but we’re guessing that has something to do with the fact that she’s seemed to make a life goal of bringing realness back to radio and making music we can actually relate to which, you know, is quite the undertaking.

We just can’t get enough of “Royals,” and listened to Lorde’s first EP The Love Club, as well as some new tunes. We’re certain and ecstatic to see and hear a lot more from the newest teenager to hit the radio. Both her music and her message are 100 percent refreshing without being over the top with “goodness” or innocence.