After a successful Season 4 premiere and an Emmy win for Season 3 star Bobby Cannavale, HBO announced Boardwalk Empire will return for Season 5. 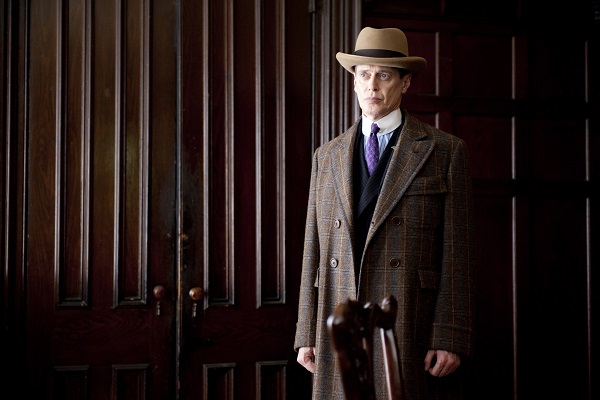 There will be no Prohibition for viewers who enjoy their annual fix of 1920s homemade hooch, big-name gangsters and the intricate weaving of fictional and historical figures such as Nucky Thompson (Steve Buscemi) and Al Capone (Stephen Graham) as HBO announced the renewal of Boardwalk Empire for a fifth season.

Find out how we’re doing with our Boardwalk Empire Season 4 predictions! >>

The foundation of Boardwalk Empire centers around the character of Enoch Lewis “Nucky” Thompson as he grows to become the unelected but undisputed ruler of Atlantic City. Nucky is loosely based on real-life Atlantic City resident Enoch “Nucky” Johnson, a politician and racketeer of Prohibition-era Atlantic City.

What makes Nucky such a compelling character is his ability to be part politician and part gangster. He represents the everyman struggling to make a life for himself in a troubled city and can hold his own with the more nefarious, legendary names around, making him a perfect anti-hero of his day.

Toast the renewal by mixing up a Boardwalk Empire cocktail! >>

Since starting its run in 2010, Boardwalk Empire has won 14 Primetime Emmy Awards and 2 Golden Globes, and Steve Buscemi has won the Screen Actors Guild Award for Outstanding Performance by a Male Actor in a Drama Series for two years running. At the Primetime Emmy Awards held this past Sunday, Sept. 22, Bobby Cannavale won the award for Outstanding Performance by a Supporting Actor in a Drama for his role as Gyp Rosetti, sparking outrage among Breaking Bad fans.

With Breaking Bad in its final season, fans believed that that series’ Aaron Paul (character Jesse Pinkman) deserved the award, going so far as to call Cannavale’s portrayal of Rosetti cartoonish and claiming he should have been competing in a different category since his role lasted only one season before his character was killed off.

In the official renewal announcement, Michael Lombardo, President, HBO Programming, released the following: “Thanks to Terry Winter, Martin Scorsese, Tim Van Patten, Howard Korder and their stellar team, BOARDWALK EMPIRE remains in a class by itself,” said Lombardo. “I look forward to another electrifying season of this impeccably crafted series.”