Wednesday night saw the return of Nashville, and — not surprisingly — a simple car crash couldn’t take down the queen of country. But Rayna’s relationships just might. Season 2 is looking like a scorcher! 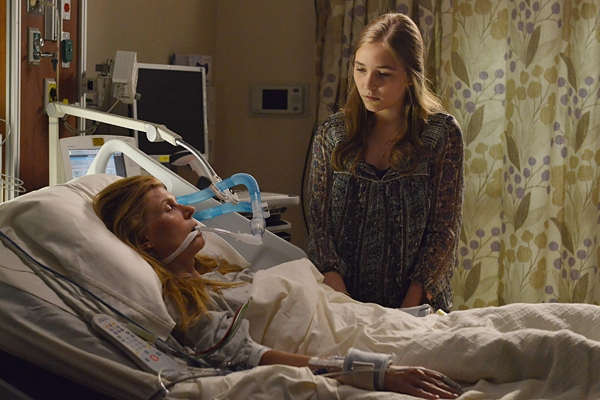 From Juliette’s takedown to Rayna’s romances (plural, people!), Season 2 of Nashville is picking up the pace. Will it recapture audience attention? The premiere’s ratings were down, but that doesn’t necessarily mean all is lost for the show.

Here’s what we’re looking at for the rest of the season. Is it enough to entice you to tune in?

That’s right, get ready for lots of love triangles. Scarlett will be stuck between Avery and Gunnar (at least in the first part of the season). We’re still hoping Juliette and Avery will strike up a relationship. (See No. 6 for more details.)

Rayna will be in more like a love octagon. From the rumors we’ve heard, it sounds like she will have quite the plethora of men chasing her down. (See No. 10 for more details.)

Interview with Nashville creator on Season 2 >>

Juliette (Hayden Panettiere) is about to get some competition, and it won’t be from Scarlett — not yet, at least.

There’s a new set of pipes in town coming from the first runner-up of a singing competition. Her name is Layla, and she’s played by Sharknado‘s Aubrey Peeples. In true Juliette fashion, she will be hissing and spitting venom all over the newcomer. Will Layla take Juliette’s place as the reigning princess of country? We doubt it. Juliette is nothing if not fierce. As we saw in the first episode of Season 2, Juliette’s always prepared with creative ways to make it to the top, no matter what she has to do to get there.

Last season, poor Avery had his share of ups and then skydiving downs. Now, he’s building up from the bottom but staying true to himself. He won’t fall off the horse again, we’re told — hey, he’s already back to singing at the Bluebird. Plus, Juliette’s band could be a really good thing for Avery’s career, and he and Juliette could be great for each other. Just sayin’. (Refer to No. 6 for more information.)

Uncle Deacon no more! But don’t expect he and Maddie to bond over their shared genes. In fact, the two will maintain their distance initially, according to showrunner Dee Johnson, who spoke with TVLine.

We have to admit that we loved the scene where Teddy corrected Maddie. Teddy told her that Deacon was her biological father but that he was still her dad. Though Teddy has made his share of mistakes, no one can say he isn’t a devoted dad — and that’s pretty endearing.

Nashville bumps up 3 to series regulars for Season 2 >>

Scarlett’s best friend, Zoey, is the new girl in town, as we saw in the pilot. She’ll be working at the Bluebird alongside Gunnar, while Scarlett pursues her singing career. Whether this girl will be a force for good between the two remains to be seen. Zoey could either encourage Scarlett and Gunnar to find their way back to one another or drive them apart (if she falls for Gunnar, for example). Here’s to hoping she’s a true friend! Scarlett’s gonna need all the help she can get on her rise to fame.

6. A true relationship for Juliette

Juliette’s going to get a man this season! And she won’t be the runaway bride this time. She’ll finally open up to someone emotionally, according to series creator Callie Khouri, who talked with TVFanatic.

We think it’ll be Avery. It has to be Avery!

Chris Carmack, who plays Will, has been made a series regular on the show for Season 2. He and Gunnar are rooming it up, and while Gunnar knows the truth, Will won’t even be admitting it to himself. The country boy will continue to deny, deny, deny when it comes to his feelings for men. Hopefully, Gunnar will help him come out of his shell.

At the end of last season, our characters’ lives were in shambles. Juliette was grieving after losing her mother and being betrayed by her manager. Rayna was going through a divorce, not to mention coming out of a coma after her car accident. Gunnar got turned down by Scarlett, and she moved out of the house. Season 2 will be the rebuild as the characters work to discover where their lives are headed after these catastrophic events.

He had a hard pill to swallow, finding out Maddie is his daughter and Rayna (Connie Britton) hid the truth from him for 13 years. Plus, she had good reason to. Though he was working through his addiction problems when Maddie was born, he was nowhere near fit to be a dad. Now, there’s the possibility Maddie will help him to get his act together once and for all.

She won’t just have Deacon and Teddy to contend with this season. A few additional suitors are about to enter and try to win her heart, including one Will Chase. (You’ll remember him from the show Smash.) He’ll be joining the show as a country music star who will get close to Rayna. It seems likely she’ll have a relationship outside of her endless love triangle — for a little while, at least.

The next episode of Nashville will air Wednesday, Oct. 2, on ABC.