Mad Men fans (and basically, women in general) are breathing a big sigh of relief after Jon Hamm explained that his throat surgery is really no big deal. 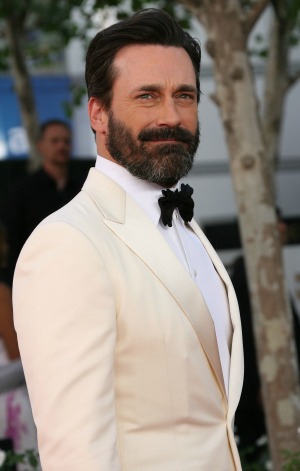 Jon Hamm has confirmed he will be undergoing throat surgery, but he wishes people would stop making such a big deal about it. A tabloid reported the procedure is for a dire condition, and Hamm went on Jimmy Kimmel Live Wednesday night to clear things up.

“I’ve got a polyp on my vocal cord. It sounds worse than it is, although it doesn’t sound as bad as how the National Enquirer reported it, which was that I was coughing up blood and probably have cancer,” Hamm explained, according to the Huffington Post. “I was like, ‘That’s good to put that out there. Thanks guys.’ Because you know, I cough up blood… never.”

The Mad Men star was a little more upset at the report than he would be for a normal tabloid story, but only because his family read it and freaked out a bit. He took that as a sign he needed to come clean about his upcoming surgery.

“My sister called me and was like, ‘Um, is there something you want to tell us?’ And I was like, ‘No, why?'” Hamm told Kimmel. “We just read that you’re probably going to die.’ I was like, ‘Wait — when? Who have you been talking to?'”

Hamm appeared at the Emmy Awards just days ago, and looked like he was fine. He and Amy Poehler even threw a very different kind of Emmy party after the show.

The actor is not the only celebrity to undergo throat surgery in recent months. Michael Douglas was treated for oral cancer recently. The actor said his type of cancer could be caused by oral sex, but is pretty sure he got his from stress.

Hamm will undergo the surgery to remove the polyp, but said it’s a completely routine procedure.