Miley Cyrus revealed that one of the songs on her new album is definitely about Liam Hemsworth — and it doesn’t exactly paint a pretty picture of their relationship. 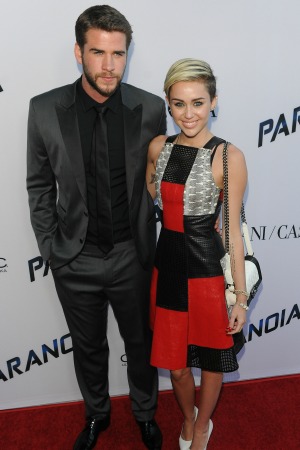 Those months of rumors had some truth to them. Turns out Miley Cyrus and Liam Hemsworth were headed for heartbreak months before they actually split, and Cyrus even wrote a song about it — way back in February!

In an interview with Fashion magazine, Cyrus revealed that the song “Drive” on her new album Bangerz is all about her relationship with Hemsworth — or, more specifically, how she wanted to leave for months but couldn’t work up the courage.

“I wrote it while I was working on Valentine’s Day,” she said. “Emotionally, it was such a hard time. It is about needing to leave someone but not really wanting to completely cut yourself off from the relationship. It’s a time when you want to leave, but you can’t. It’s also about moving on.”

It was just a few weeks later that the singer was spotted partying in Los Angeles without her engagement ring. A week after that insiders said they had split because of either Hemsworth’s cheating or Cyrus’ partying.

However, the couple stayed together throughout the summer and was last spotted on the red carpet together in August, at the premiere of Hemsworth’s flick Paranoia.

The couple finally announced their split in mid-September. Not wasting any time, just a day later Hemsworth was spotted kissing another woman, later identified as Mexican actress Eiza Gonzalez.

Cyrus clammed up about the relationship after letting loose that little tidbit to the magazine, but she said she is definitely focused on her career and making people think.

“Terry Richardson shot my video for ‘Wrecking Ball’ and he’s about capturing strength versus beauty,” she explained. “His women look so strong in his images. I was so inspired by [photographer] Ryan McGinley’s work, too [for the video to ‘We Can’t Stop’] — especially a series where he shot all these the girls coming out of trees. Having artist Todd James create all the teddy bears for the VMAs was a thrill too — it was one of the things I was hoping people would focus on.

“I was hoping some would think, ‘Miley may be out there shaking her ass and having fun but she’s got some intelligence.’ Some people just saw the teddy bears but they didn’t look into the details. We had [faux] Picasso paintings going by the stage, too. People who want to open their eyes can see something bigger in my work.”