Was Franco’s Dr. L raped on the latest episode of The Mindy Project? Some people think so. 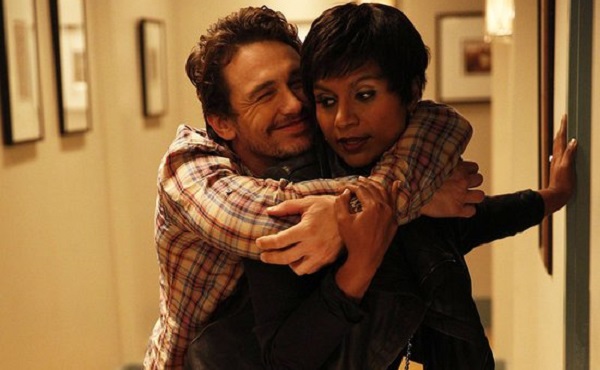 Fans and casual viewers of The Mindy Project are ticked off after Tuesday night’s episode, and they’re taking to Instagram to let the show’s creator/writer/star, Mindy Kaling, know exactly how they feel about the issue.

Their problem? They’re taking issue with a quick scene involving guest star James Franco. In an effort to win back her office and nickname, the original Dr. L (Mindy Kaling) challenges the new Dr. L (Franco) to a “shots off.” Mindy knows Dr. L is a lightweight and that she can beat him, thus securing her place at the office. After peer pressuring him into the game and beating him, Mindy feels guilty and helps the incoherently drunken Dr. L back to his apartment. (She kisses him, but that is apparently irrelevant right now.) She leaves Dr. L at the front door, and that’s when things get interesting.

Danny’s ex, Christina, shows up a little while later to drop off some stuff for Danny. Since she still has a key to the apartment, she helps the still drunk Dr. L into the apartment. As she’s helping him in, he apologizes for Danny ruining her life. The next morning, it’s made very clear that the two had sex. When it all comes out at the office, Dr. L confesses that if he hadn’t been so drunk, he never would have done it.

And that, dear readers, is where some fans are taking offense. If Dr. L was that drunk, was he really in a right mind to “consent” to sex? Some viewers think that he wasn’t, which means that Dr. L was raped, and many viewers are unhappy about how the situation was handled.

Spoilers? Will someone get married this season on The Mindy Project? >>

When Kaling posted a picture of her and Franco on Instagram, her followers erupted with hate over the episode. The picture has gotten more than 100 comments! Things are way out of control.

“@mindykaling, I know you have a TV show that belongs to you and you can do whatever you want with it, but is it responsible to have a character raped and then act like it’s his fault?” commented Instagram user franciee. She added, “People like many commenters here have now reinforced their belief that people too drunk to consent aren’t raped, and that men can’t be raped. Maybe it will come back around in a way that makes sense in the show, and of course Mindy can write whatever she wants, but I found it unfunny and disturbing, and I’m not the only one. I don’t think it’s an issue of taking things too seriously either, we should all be conscious of what messages we are receiving from media, even from people we love to watch and whose judgment we usually trust. Long post, I know, but IJS.”

Another user, melmillpott4 countered with, “People are too serious now days- [sic] it’s a sitcom, geez! Get your big girl panties on & have laugh everyone in awhile [sic]! I thought Franco’s appearances were short. Surprised, he ‘seems’ to be written off script for now. Good show…”

One fan, though, took it all in stride. “Man. I’m camping and haven’t seen the episode yet. But I’m super excited to get all offended! It’s a tv show ppl. Don’t watch it if you don’t like it,” allisonimac teased.

Our advice comes straight from Dr. Reed’s mouth: “Be a gentleman: Call him a Welshman and move on.”

What do you think? Was Dr. L raped? Are fans blowing everything out of proportion, or should this be taken more seriously?