Tina Fey proves she’s willing to make fun of herself for any type of joke in the new promos for the season premiere of Saturday Night Live. 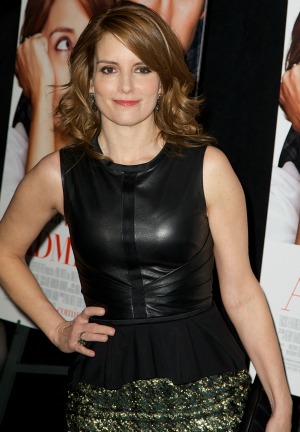 Saturday Night Live is kicking off their 39th season this weekend with former cast member Tina Fey hosting for the fourth time and Arcade Fire appearing as musical guests. In order to promote the season, the funny lady is starring in a series of promos with cast member Kenan Thompson.

In one spot, she mocks her wardrobe malfunction from Sunday night’s Emmy Awards. At the ceremony, she accidentally had a “nip slip” when she went onstage to collect her award.

Thompson tells TV viewers, “There will be no more wardrobe malfunctions like at the Emmys.”

The funnyman then addresses Fey and asks, “Unless you want to do one?”

The 30 Rock creator replies calmly, “No, it’s not gonna happen. It’s under control!”

At that moment, she raises her arms which opens her black jacket to reveal she has nothing on underneath the blazer. The shot is blurred, but the viewer quickly catches on.

She hits the punchline and says, “Not gonna happen again. I’m pretty sure.”

One of the other notable spots teases the series finale of Breaking Bad and how the SNL broadcast will be over in plenty of time for viewers to watch. Fey is seen begging the audience at home to join them for the season premiere of the long-running sketch comedy show.

The comedienne joined SNL in 1997 as a writer on the show. Her first on-camera appearance was in 1998 and she was named head writer in 1999. Fey left the show in 2006 to develop her critically-acclaimed NBC sitcom, 30 Rock.

51 mins ago
by Alicia Kort