Eva Longoria doesn’t have baby on the brain. The actress and producer is happy living the single life. 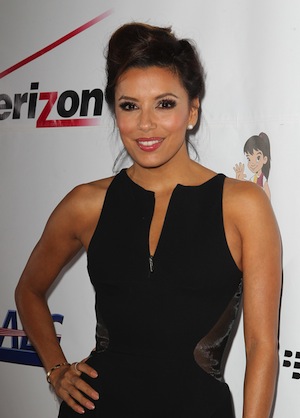 Eva Longoria is a modern, independent woman. Since Desperate Housewives‘ cancellation, she’s beefed up her business resume. She’s working behind the scenes (as executive producer of Devious Maids), while branching out with other media platforms.

With such a full slate, how will Longoria find time for love or kids? The actress recently spoke to Access Hollywood Live about her biological clock. She confessed that she’d be content with or without children.

“I’m not one of those women that’s like, ‘Oh I must procreate!'” the actress said. “So, no. I think kids are a product of love, so if you find the right person and you want to have a family with that person then that’s when the time is right.”

Longoria doesn’t fear growing old and being childless. That’s not really an issue for her. “I don’t think if I’m 50 and single — I’m not going to go and [have a baby] by myself,” she said. She’s also not in a hurry to settle down again. Longoria was asked if she’d be willing to give marriage another shot.

“I’ve been married twice, so that’s been there, done that!” she said with a laugh. But when it comes to dating, the actress doesn’t have a specific “type.” She’s gone out with “all different kinds of types of men.” Longoria likes to keep her options open.

Here are a couple deal breakers: “[Being] funny is important, you know. [And being] educated is important to me,” she said.