Nicki Minaj admits that Cameron Diaz had her shaking in her boots. The self-proclaimed diva was star-struck by the former Charlie’s Angel. 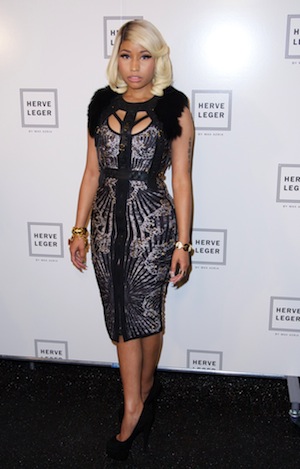 Nicki Minaj isn’t easily intimidated. On American Idol, she went toe-to-toe with Mariah Carey on a weekly basis. But that’s because it was about music. That’s where Minaj feels the most comfortable. She recently branched out into the acting world and will make her debut in the Nick Cassavetes comedy The Other Woman.

The headlining star is Cameron Diaz, which made Minaj extremely nervous. She told E! News about her first day on set. “Cameron Diaz walks in the room and I’m like, ‘Kill me. Is this really happening?'” Minaj said. “She lights up the room and all I could think of is what if I do something and she things that I suck, what is she going to say? Is she going to demand that I be kicked off the movie? I was just thinking crazy stuff.”

Nicki Minaj to assist Cameron Diaz in The Other Woman >>

The rapper had nothing to worry about. She quickly realized that Diaz was cool as a cucumber. Later on, she gave Minaj a boost of encouragement. “She came up me in the middle of the day and was like, ‘You’re doing such a great job,'” Minaj confessed. “That melted me… And that pushed me. She was like, ‘You’re making really great choices.'”

In the film, Minaj plays the very opinionated assistant to Diaz’s character. That means they’ll have a lot of scenes together. It’s a good thing Minaj was able to shake her nerves sooner than later.