Melissa Joan Hart is letting it all hang out in a tell-all book. She openly discusses drugs, sex and her famous make-out partners. 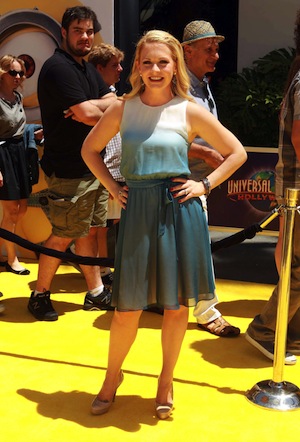 Melissa Joan Hart is a former child star who’s still going strong. As one half of the hit ABC Family comedy Melissa & Joey, she’s experiencing a new wave of success. If you grew up in the ’90s, you’re aware of her earlier work, the first being Nickelodeon’s Clarissa Explains it All and the second Sabrina the Teenage Witch.

Nickelodeon proves that the ’90s were All That >>

Both shows had healthy runs and even a couple spin-offs. It seemed as if Hart was one of the few teen actors to make the adult transition unscathed. Well, at least that’s what we thought. The actress is releasing a new book, Melissa Explains It All, in which she details her troubled youth.

Life & Style got a first look at Hart’s candid confessions. “I experimented with weed, Ecstasy, mushrooms and mescaline for about a year and a half,” Hart said. She even explains a wild night of partying that included a trip to the Playboy Mansion and making out with a girl in a limo. This was followed by a photo shoot, which she worked through high. “That was my third or fourth time on Ecstasy,” she revealed.

Melissa Joan Hart on motherhood and “Once Upon a Birth” campaign >>

The book name-checks a lot of celebrities. Hart says Paris Hilton once offered her cocaine. “I was kind of running with a bad crowd,” she said. “I just didn’t enjoy taking drugs. I don’t like the loss of control.” And when it comes to dating, she’s had her pick of the litter.

She claims to have made out with Jerry O’Connell, who she referred to as a “man-whore.” There was also a hookup with Backstreet Boy Nick Carter, but she didn’t go for every hottie she saw. Hart admits that she and Ashton Kutcher “just didn’t get along.” She tried to kick him out of her parties twice because of his “smarta** remarks.”

Melissa Explains It All sounds like a juicy read. You can pick up a copy when it hits stores Oct. 29.