Catherine Zeta-Jones and Michael Douglas may have separated, but they’re working very hard to patch things up and get back together. 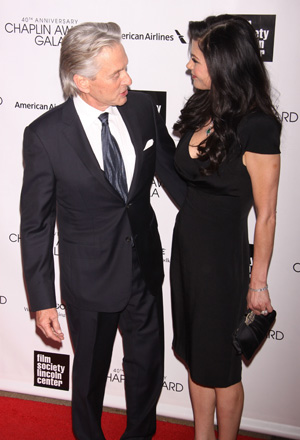 It’s been a rough few of months for Catherine Zeta-Jones and Michael Douglas, but the recently separated couple is putting in lots of work to get their relationship back on track.

Not ready to call it quits permanently, Zeta-Jones and Douglas have been going back and forth trying to decide whether their 13-year marriage is worth saving, People magazine reported. “They’re not giving up,” a source told the magazine.

For the time being, the couple is keeping separate lives, with Zeta-Jones promoting an event in China, while missing her husband’s Emmy win for Behind the Candelabra on Sunday. But Douglas is still talking to Zeta-Jones several times a day, every day, the source added.

However, the pair will not be celebrating their mutual birthdays together on Sept. 25 as they traditionally have in the past. Douglas is going to be in New Mexico filming his new movie, The Reach, while Zeta-Jones will be in New York with their children.

When asked about his relationship at the Emmys red carpet on Sunday night, Douglas himself confirmed to People that he and Zeta-Jones are trying to mend their marriage. “We’re working things out, and we’ll see how it goes.”

The Wall Street star, 69, also gave more hints at a reconciliation with his 45-year-old wife when he thanked Zeta-Jones for all her support during his Emmys speech.

Douglas and Zeta-Jones announced their separation in August after a series of events affected their families during the past couple of years. Douglas had a challenging battle with throat cancer — which he beat — while Zeta-Jones endured two rehab stints to treat her bipolar disorder.

Their relationship troubles were first reported after Zeta-Jones checked in for her second round of psychiatric treatment. Additionally, the normally tight couple hadn’t been photographed together since April of this year, so rumors began swirling when Douglas was seen vacationing on a yacht in Sardinia by himself.

Catherine Zeta-Jones has the secret to wedded bliss >>

Zeta-Jones and Douglas were married in 2000 with a luxurious celebration at the Plaza Hotel in New York City. They have two children together, Dylan, 13, and Carys, 10, and Douglas has an older son from a previous marriage, Cameron, 34, who is currently in prison for drug charges.