There’s a Paul tearing up the road and it’s not Walker. Aaron Paul trades his meth for cars in next year’s Need for Speed.

Related story A Brief History of Celebs Cursing at the Golden Globes, From Ricky Gervais to Joaquin Phoenix 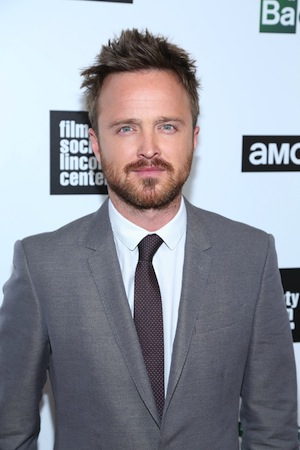 Aaron Paul is wasting no time getting his career in order. With Breaking Bad behind him, he’s moving on to the big screen. How do you surpass one of the greatest TV shows of all time? You don’t. Paul’s going in a completely different direction with Need for Speed.

The film is based on a popular video game series. It’s published by Electronic Arts, which released the first installment in 1994. Perhaps that’s why the live-action version is hitting theaters next year. It could capitalize on the game’s 20th anniversary.

Need for Speed centers on an auto mechanic named Tobey Marshall (Paul), who along with a few pals, builds and races muscle cars. We know it sounds very Fast and Furious. But in this story, Tobey joins forces with former NASCAR driver Dino Brewster (Dominic Cooper), who ends up framing him for manslaughter.

Tobey goes to prison and has a huge chip on his shoulder. Can you blame him? That’s why this first trailer is filled with angst. The quick glances and blank stares are just a setup for something more to come. Tobey’s a man on a mission. Even though revenge is his focus, he may find redemption instead.