Chloë Grace Moretz unleashes her wrath in a new promo for Carrie. She’s mad as hell and she’s not going to take it anymore. 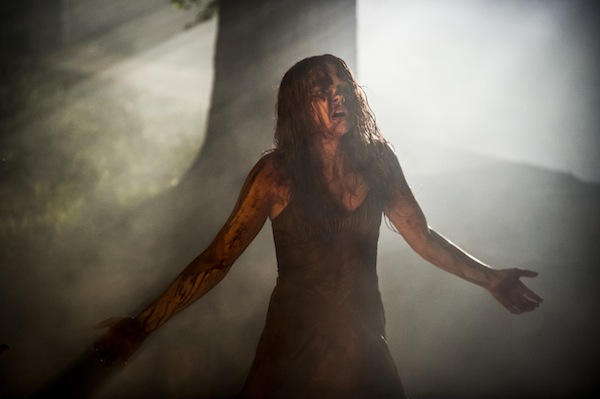 Next month, Sony will release a new adaptation of Stephen King’s Carrie. It’s not a remake of Brian De Palma’s 1976 film. Instead, it draws inspiration from King’s original novel. It’s directed by Kimberly Peirce and stars Chloë Grace Moretz as the tortured title character.

Carrie White isn’t a normal teenager. She has the ability to move objects with her mind. She thinks it’s a fascinating gift, while her religious zealot of a mother (Julianne Moore) considers it evil. Not only does Carrie have to deal with an overbearing parent at home, but she’s constantly bullied at school.

The latest TV spot previews the story’s iconic climax. When Carrie goes to the prom, she’s mortified when her classmates play a nasty trick on her. She’s humiliated in front of the entire school. As her mother predicted, they all laugh at Carrie and that’s when she snaps. She goes on a murderous rampage that leaves the town in shambles. Like the tagline says, they will remember her name.

Chloë Moretz is a tormented teen in new Carrie trailer >>

The film promises to examine themes of teen angst paired with the supernatural. One of the great things about this version is that Carrie’s played by an actual teenager. A 16-year-old Moretz is much more relatable than a dressed down 20-something.

Check out the promo below: