Thor’s back in a new promo for the upcoming sequel, Thor: The Dark World. The god of thunder joins forces with Loki (his nemesis) to defeat a common enemy. 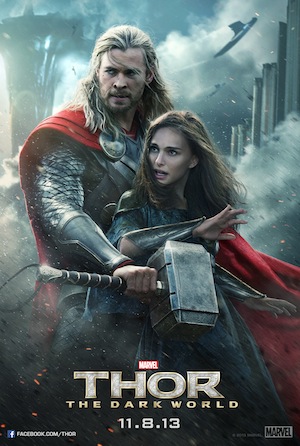 On Tuesday night, ABC premiered the long-awaited Agents of S.H.I.E.L.D., an action drama based on the fictional agency from both the Marvel comics and movies. There were multiple reasons for viewers to tune in for the pilot. One of the biggest incentives included a new trailer for Thor: The Dark World.

Marvel made a genius marketing move by cross-promoting the film with the show. Fans of the superhero were in for a treat. The ad was an extended TV spot that gave us 60 seconds of Asgard goodness. It showed Thor returning to Earth and reuniting with Jane Foster (Natalie Portman). She’s not thrilled to see him considering he’s been M.I.A. for months.

Jane, like the rest of the world, saw what happened in The Avengers. She saw Thor in action as part of the superhero team. It’s great that he saved the world, but she’s a little upset he didn’t pay her a visit. In the grand scheme of things Jane’s anger is the least of Thor’s problems.

There’s a new villain on the horizon called Malekith (Christopher Eccleston), who’s obsessed with plunging the universe into darkness. He’s an opponent way out of Thor’s league. This threat causes the god of thunder to take desperate measures.

Thor reluctantly enlists the help of his brother Loki (Tom Hiddleston), who’s been serving time behind bars. That’s what happens when you try to enslave the human race. Thor doesn’t trust him, and rightfully so. Unfortunately, his options are slim and he doesn’t have a choice.