Kit Harington’s star is on the rise thanks to his role on HBO’s Game of Thrones. He’s spent hours sword fighting on an icy terrain, but Emmy-fashion was his biggest challenge. 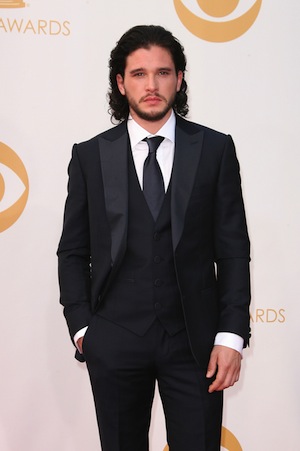 Sunday’s Primetime Emmy’s taught us a major lesson. Men can make scruffy look good. What’s their secret? Even though Jon Hamm and Kit Harington are natural beauties, they got a little help.

Harington, who plays Jon Snow on Game of Thrones, is currently filming its fourth season. His character is known for his long hair and full beard, which needed to be spruced up.

Bold and beautiful: Celebs get colorful at the 2013 Emmys >>

According to EW, Harington’s very casual and swears he doesn’t keep groomers on call. “I’m not high maintenance. I did not take that long to get ready today but I did have a groomer, which was nice,” Harington revealed. “I don’t always get one but they splurged today.”

What celebs’ Emmys dresses say about their personality >>

So what did Harington need help with exactly? “They touch up the beard. They make sure you don’t look like you’ve just fallen out of bed, which I usually do,” he admitted. “You know what they do, really good groomers? They calm you down. They give you a little massage and make sure you’re feeling calm.”

On the outside he looked like a million bucks, while his insides were on fire. The California heat didn’t do him any favors. “I came from Belfast, that’s where I am [filming] this season. Belfast is a lovely city full of lovely people, but it is not the nicest of weather. So it is a treat to be here, even though I am boiling my t-ts off.”

He continued, “But that’s just the three-piece suit [I’m wearing].”