Bill Nye has gotten by on Dancing with the Stars by being the fan favorite, so how will the fans react if reports are true that he was rushed to the hospital while practicing his newest routine? 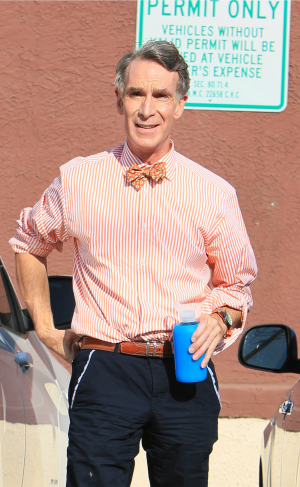 Bill Nye has come out as a surprise favorite on this season of Dancing With the Stars, but his future on the show is in question after reportedly being sent to the hospital Tuesday. According to RumorFix, the Science Guy injured his knee while rehearsing his latest number and was rushed to the hospital.

Nye is reportedly undergoing an MRI and may need surgery.

Derek Hough danced his way to an Emmy win >>

The 57-year-old’s dance a week ago was an Internet sensation and has already gotten more than three million views on YouTube.

Nye was announced as an addition to the new cast along with Leah Remini, Amber Riley and others earlier this month.

Burke knows what she is talking about, because she is a dancer herself. She recently told SheKnows the dance floor is where she belongs.

“The ballroom feels like home,” she said. “I have my own sense memory from dancing while I was competing, so my nervous energy is more about the stars than my own hosting responsibilities.”

The video views on Nye’s dance are the most of any other dance since the competition show began.

“His dance went viral,” she said. “It’s so huge. He has mad fans. I am in awe of him. He probably thinks he’s going home. But I don’t think so.”

Bill Nye rips creationism: Er, he is the “science guy” >>

Nye only received a 17 out of 30 Monday night, and has been receiving questionable reviews, but he wasn’t the one who ended up going home. His fan favorite status saved him for at least one more week. But science may not have. Nye’s knee may be the thing that sends him home this time.

“It’s not just about the dancing, it’s all about the journey,” Burke-Charvet said.

Let’s just hope Nye still has some of that journey to go.

Watch Nye’s performance on week 1 of Dancing With the Stars.