Dumb & Dumber fans everywhere got their wish today when both Jeff Daniels and Jim Carrey tweeted photos of themselves on the set of the sequel 20 years in the making. 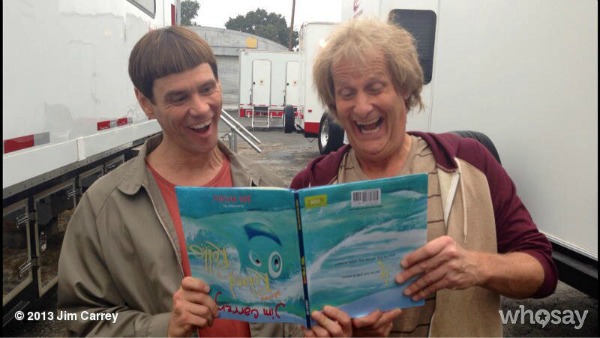 Nearly 20 years after Dumb and Dumber was released, we finally have proof that a sequel is in the works. Jeff Daniels and Jim Carrey both posted photos from the set of the film on their Twitter pages on Tuesday, dressed as the original characters from the film.

Daniels told USA Today on Emmy night that he was headed to Atlanta to begin working on Dumb and Dumber To, a film 20 years in the works.

3 Things The Newsroom taught me about the media >>

Dumb and Dumber was released in 1994 and eventually made $250 million at the worldwide box office (not bad for a film that cost $17 million to make), and both actors were never the same.

Daniels took home a surprise win at the 2013 Emmy Awards for Best Actor in a Drama Series for his HBO show The Newsroom. Backstage after the win, he was asked what he planned to do next.

“We’re going to party until dawn and then I’m going to hop on a plane to Atlanta and start shooting Dumb and Dumber To,” he said.

Carrey also posted a photo alluding to the film on his Twitter page earlier this month.

The actor again tweeted on Tuesday in full Lloyd costume, but this time did what he could to promote his own book, along with the caption, “How Roland Rolls comes out TODAY but it may be a little too sophisticated for Lloyd and Harry! Yep… THEY’RE BAAAAA…”

Dumb and Dumber To will follow Harry and Lloyd, as well as Harry’s illegitimate daughter, according to Yahoo. Laurie Holden and Kathleen Turner join the cast of the film, which is expected to be out in 2014.