The doctor has become the patient. Earlier this year, Dr. Drew Pinsky found himself in the fight of his life — against cancer. 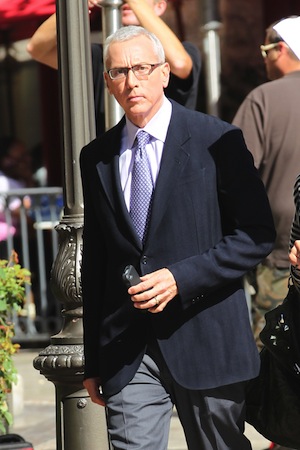 Dr. Drew Pinsky has dedicated his life to helping people. He’s a board-certified internist as well as an addiction medicine specialist. Many of us know him from his radio and television shows, where he hands out advice to everyday people.

Earlier this year, Dr. Drew was the one in need of help. He recently wrote a revealing post on the official website for HLN’s Dr. Drew On Call. In it, he detailed his recent battle with prostate cancer.

“While many of you were celebrating the Fourth of July, I was at home on my couch recovering from a radical robotic prostatectomy,” he explained. “Four hours of surgery had left me in great pain, without an appetite and in need of help from my college-age son, Jordan, to get up and lie down. But I was cancer-free for the first time in at least two years.”

Dr. Drew went for a routine check-up, where an ultrasound revealed the central lobe of his prostate was an abnormal size. He was initially diagnosed with prostatitis, an inflammation of the prostate. But his doctor was concerned about the sudden rise in his PSA levels (Prostate Specific Antigen).

Men’s health: How to help your mate survive prostate cancer >>

From there they did a biopsy and found a low-grade tumor. They decided on a “course of active surveillance.” They wanted to see if this mole hill would turn into a mountain. Unfortunately, over a year passed and the tumor had spread. Dr. Drew and his physician agreed surgery was their only option.

In early July, he had a radical robotic prostatectomy. The procedure includes “a four-armed robot operated by a surgeon at a control panel.” It maneuvers inside the body in place of the surgeon’s hands. After it was all said and done, Dr. Drew felt strange but relieved.

You can learn more about prostate cancer by visiting www.pcf.org.