Miley has released yet another video for a song from her upcoming album Bangerz, and it’s chock-full of drug references, skin and inappropriate dancing. Yawn. 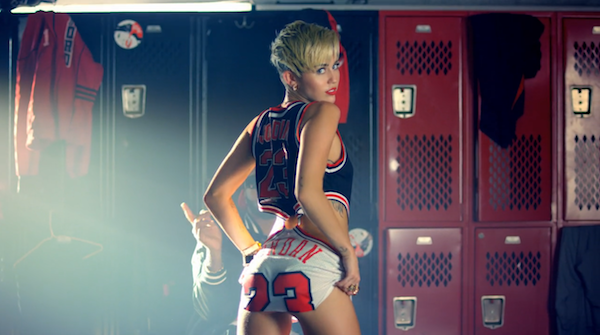 It’s been at least 17 hours since new Miley Cyrus news, so it was about time for her to release another video.

Miley’s new video is for her song “23,” and at first I thought it could be a fun poppy response to Taylor Swift‘s “22.”

P!nk: “Miley’s cheating herself and her fans” >>

This time, Miley has clothes on — which is an improvement— but the tongue is still out. Also included are the references to getting high, her cringe-worthy dance moves and numerous crotch shots.

Evidently Miley figured she could phone this one in so she let her co-stars, Juicy J and Wiz Kalifa, do all the work. All Miley had to do was rap one verse and a refrain. The rest was up to the guys.

And truthfully, I know Miley’s “hard” and all, but it really does sound like a suburban teenager trying to fit in with the cool guys by rapping. Sorry, Miley. This one doesn’t work.

Liam Hemsworth has moved on >>

At the beginning of “23” (a reference to NBA superstar Michael Jordan) we find ourselves in an inner-city school. Using the age-old trick of distracting the principal by bouncing a basketball outside of his door, Juicy and Wiz get hold of the intercom and broadcast the song throughout the school.

Miley, who is so going to get detention for lack of clothing at school, is smoking an unknown substance (which is most likely salvia) in the girls’ restroom when she hears the music and starts rapping about Miley things.

“I’m in the club high off purp with some shades on
Tatted up, mini skirt with my J’s on”

“Purp,” of course, refers to cough syrup and “J’s” are clearly her Michael Jordan Nikes.

Everyone is so impressed by Miley’s rapping that a pep rally breaks out and Miley is able to change from her Michael Jordan bikini to a dress that she ruined two perfectly good Michael Jordan jerseys to make.

In high-school math class, you learn that a negative plus a negative equals a positive, but there is just so much wrong here that there isn’t much positive that can come out of this video.

It was cute and funny at first, but now Miley has gotten to that point where she’s a parody of herself, which is extremely sad.

But at least she has her J’s to keep her warm.

What do you think of Miley’s new video? Watch and let us know in the comments below.