This is a fictional representation of what could happen on the upcoming Breaking Bad finale. There’s no wizardry involved, only enjoyment, conjecture, wishes and imagination. 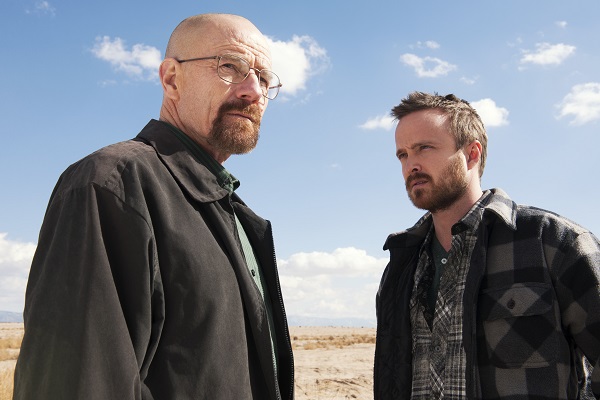 It’s prediction time for the series finale of Breaking Bad. The odds that this particular prediction comes true are about as good as the odds of any other prediction out there — not very good at all. The fun is in playing the game, so let’s get started!

This prediction is based upon two factors: the title of the episode and a comment once made by series creator Vince Gilligan that there might be one more “overt tips of the hat” to The Godfather before the final credits roll.

We aren’t the first ones to figure out the chemical components to the aptly titled finale anagram “Felina.”

It’s like the Breaking Bad formula for blood, sweat and tears.

With the flash-forwards we’ve seen so far, we know Bryan Cranston‘s Walter White (or Heisenberg, as he seems to have fully transitioned) grabs an M60 machine gun, which would certainly indicate we can expect some blood. Jesse Pinkman (Aaron Paul) was left in a horrid state at the end of “Granite State.” After spending a couple months without company and listening to his old partners on television say that Walter White was gone, Walter has realized how much having Jesse in his life meant to him, and he left the bar to go save the person who once meant so much to him and who he let down so dramatically: Jesse.

Time being fluid in television, he could very well have left that bar long before Uncle Jack (Michael Bowen), Todd (Jesse Plemons) and friends thwarted Jesse’s escape. Walter is there, right behind Jesse after he climbs back down the fence, and he drags out that M60 to tear down Jesse’s captors. Blood is shed — a lot of blood. Todd, however, escapes. He’s gravely injured — but alive. Walter and Jesse are too spent to go after him.

Jesse’s life hasn’t been all that great lately (talk about an understatement!). While he can trace all bad things back to Walter, his solitude, desolation and despair mean he doesn’t greet Walter — once a friendly face — with as much animosity as we expect. After tearful attempts at explanation, the two men — still not forgiving each other for the past and wary of what comes next — realize they’re each other’s best hope for the future. They take the hoard of meth that has accumulated and the barrels of money and head off.

Walter has convinced his war-ravaged family to join him on some island location where he and Jesse have absconded with the money and the meth (don’t ask how — this is fantasy-land; leave the logistics to the big guns). Jesse is slowly distributing the meth through international sources and controlling the empire while Walter more quickly dies of cancer.

Jesse has found a new lady to love, and without the constant threat of discovery hanging over their heads, they have had a little girl. Everyone is happy. (You were warned there were wishes involved in this prediction!)

Todd traces the 96% pure, blue meth back to them and sets up a hit on their families. One lazy, beautiful day by the beach turns into utter horror. Only Jesse, his little girl and Walter are left alive. As Jesse and Walter are crying together over what happened, Jesse takes the ricin capsule he knew Walter had hidden away, puts it into Walter’s drink and watches while Walter downs it in a gulp.

What’s your story? How would you write the ending of Breaking Bad?

In case you missed even a minute of Breaking Bad, AMC is giving you a chance to see it all from the beginning. Starting tomorrow, Sept. 25, the first episode will air at 8/7c and each episode will follow in one continuous block (with a break in the wee morning hours for infomercials) until the series finale airs on Sunday at 9/8c.