Leah Remini is hoping she will triumph on Dancing with the Stars, if only to prove wrong one powerful group who spent the summer trying to bring her down. 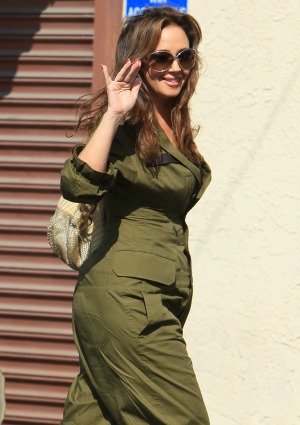 Actress Leah Remini is talking about her split from Scientology on Dancing with the Stars for the first time, and she says the church would love nothing more than to see her fall flat on her face.

“I was always so scared to be myself — you’re used to everything that happens to us is our fault,” the King of Queens star told her dance partner Tony Dovolani during dance practice. “I’m going through a personal and big change for me and my family. The church is looking for me to fail so they can say to their parishioners, ‘Look what happens when you leave.’ They’re waiting for me to fail.”

Remini later told E! News that being cast on DWTS could not have come at a better time. “The show has been a godsend, and Tony has been a godsend,” she said. “The cast and everybody has rallied around me. I have so many supporters I didn’t know I had and really, the show has given me so much.”

Including some new friends to fill the void left by leaving Scientology. She told Ellen DeGeneres, “I don’t feel like I lost friends, I actually lost friends. It sucks, but at the same time it is what it is and we have to move on, but I feel like I have a lot of really good friends, a lot of new friends.”

Watch Leah Remini on week 2 of Dancing with the Stars

Failing she is not: Remini and Dovolani’s samba earned them a solid 24 points this week, bringing their total to 45 points and placing them squarely in the safe zone.