Miley Cyrus is tired of taking heat for her VMA performance. She’s going after the media for their double standard when it comes to women. 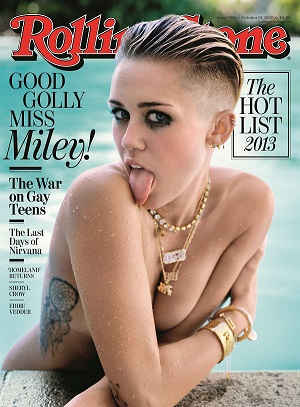 A scantily clad Miley Cyrus covers the latest issue of Rolling Stone magazine. The singer appears topless by a pool with her signature tongue hanging out. It’s an image we know all too well thanks to her infamous performance at the MTV Video Music Awards.

Speaking of the performance, Cyrus isn’t done defending it. She believes critics and the general public are looking at it all wrong. She admits she got too friendly with Robin Thicke, but believes she’s being singled out.

Robin Thicke says VMAs were all about shock and awe >>

To be fair, we saw a lot of “Old man Thicke” jokes after the incident. Also, many were disturbed that a married man with a child would be so provocative, while his own wife (Paula Patton) was in the audience.

Cyrus also revealed that she’s avoiding blogs right now. “I think it’s an important time not to Google myself.” She also claims that she wasn’t trying to be sexy during her performance — despite the excessive grinding and butt-grabbing. “If I was trying to be sexy, I could have been sexy. I can dance a lot better than I was dancing,” she confessed.

Miley Cyrus on VMAs: We just wanted to make history >>

Cyrus went on to discuss censorship and what’s considered acceptable in the media.

“America is just so weird in what they think is right and wrong,” she declared. “Like, I was watching Breaking Bad the other day, and they were cooking meth. I could literally cook meth because of that show. It’s a how-to. And then they bleeped out the word ‘f***.’ And I’m like, really? They killed a guy, and disintegrated his body in acid, but you’re not allowed to say ‘f***’? It’s like when they bleeped ‘molly’ at the VMAs. Look what I’m doing up here right now, and you’re going to bleep out ‘molly’? Whatever.”