Fifty Shades of Grey fans are still up in arms about the movie’s casting. But former front-runner Ian Somerhalder isn’t holding a grudge. 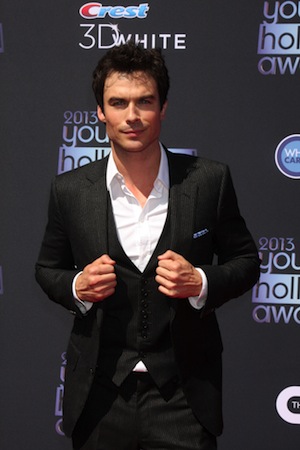 Despite what some might think, Ian Somerhalder isn’t crying over the Fifty Shades of Grey movie. The Vampire Diaries star is fine with Charlie Hunnam landing the role of Christian Grey. Like Matt Bomer, Somerhalder was chosen by fans to play the literary character. But the film’s producers had other plans in mind.

Somerhalder recently appeared on Huffpost Live, where he cleared the air once and for all. He exclaimed that he’s “unbelievably grateful for all the support and all the cheering and the love” but he’s “on a TV show that shoots 10 months a year.” In other words, when would he find time to make the movie?

Hunnam also headlines a TV series (FX’s Sons of Anarchy), but he has the luxury of a much lighter workload. The drama usually runs for about 10 episodes, while The Vampire Diaries averages 23. Somerhalder swears he was never upset about Hunnam’s hiring.

“It’s so funny, you read these blogs — ‘Ian Somerhalder angry, livid he’s not Christian Grey’ — I mean, no, no, no, there’s none of that,” he said.

Come on guys, let’s give Hunnam a chance. He may not be tall, dark and handsome, but he is tall, blond and handsome. Two out of three isn’t bad.

Fifty Shades of Grey also stars Dakota Johnson as Anastasia Steele and is directed by Sam Taylor-Johnson. The film opens in theaters Aug. 1.