While many are hoping Khloe Kardashian and Lamar Odom will reconcile, there is one person who is hoping for a divorce — Lamar’s father, Joe. 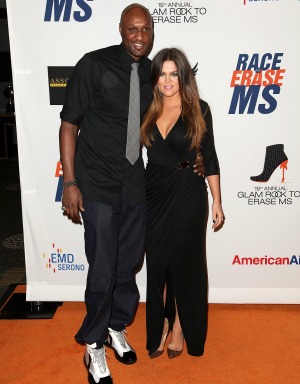 It is no secret that Lamar Odom and Khloe Kardashian have been experiencing difficulties with their marriage, in light of allegations that the basketball star has been cheating and abusing narcotics.

While most of the world is behind the reconciliation of the pair, one person who’s definitely not is Lamar Odom’s father Joe.

He believes that the root of his son’s problems stem from his four-year marriage to the reality TV star.

He told Heat magazine, “They brought him down. He would be better off without them. I think the best thing for him would be to have a clean break and divorce Khloe.”

Joe then directed his comments at Kris Jenner, saying, “She’s been talking trash about my son, saying he’s on drugs and stuff like that. I don’t think she cares about Lamar, she just cares about their image and money.”

Khloe Kardashian has found fame from the reality TV show, Keeping Up With the Kardashians that follows the lives of her family and herself and Joe Odom believes that their appearance on the show is all fake and does not represent the Kardashians’ true nature.

He added, “I wish he had never got married to Khloe. She’s controlling. Those Kardashian women all are.”

“It isn’t pleasant. In public she’s nice, but if you see her in person you actually see the real person. The mother’s like that, too. The whole family, they put up an act.”

Harsh words from Lamar’s father, who clearly has had enough of the Kardashian clan.

Trouble continues to brew in the Odom-Kardashian household, as Khloe removed the Odom part of her surname on her Instagram account yesterday.

Although her Twitter handle remains the same, could the removal of her husband’s surname suggest the pair are over? Or do you think there are other reasons for the star’s decision to revert to her maiden name?