Britney Spears has just signed a two-year Vegas contract with a juicy paycheck and would like her eldest son to be a part of her performances. However, his dad Kevin Federline has disputed this decision. 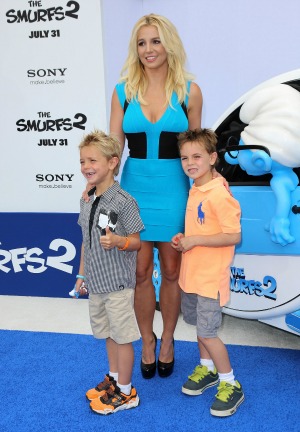 The only good thing that came out of Britney Spears‘ marriage to Kevin Federline was her two sons, Sean Preston, 8, and Jayden James, 6.

Recent reports suggest that the “Toxic” songstress was planning to include her eldest song in her Las Vegas performances.

The pop star confirmed her two-year-long, Piece of Me residency in the Nevada city on Good Morning America on Sept. 16. Due to begin at the end of the year, Spears had hoped to include Sean Preston.

When asked whether her sons would be joining her on stage in Sin City, Spears said on Good Morning America, “[Sean] Preston will probably be on stage but I think Jayden would have a hard time with it.”

If her sons did join her on stage, it would not be their first time in the limelight, as the boys joined their pop star mother on the soundtrack single “Ooh La La” that was produced for Smurfs 2.

However, Federline is not happy with the suggestion of his son performing in Vegas!

The former couple were married from 2004 to 2007 and have joint custody over their two adorable sons. However, the thought of them performing in Vegas is a serious conflict with Federline’s views on parenting.

When a TMZ reporter asked Federline whether he would let the boy perform, Federline said: “I mean… we’ll see about that, won’t we.”

When pressed for further comment on his son’s performance, Federline scoffed, “Yeah, if he was like 25 years old.”

Federline expressed little interest in his ex-wife’s show at all, saying he would not be rushing to Vegas any time soon to see her perform.

Federline told TMZ, “Nah man. Not my thing. When I’m in Vegas, I’m at the craps tables.”

With a rumored paycheck of $310,000 a night, we doubt Spears is concerned about what her ex-husband has to say about any of her performances.