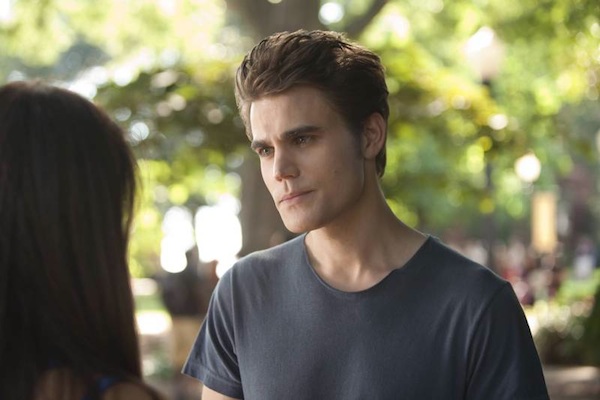 In case the headline didn’t give it away, Season 5 of The Vampire Diaries is shaping up to be the sexiest season yet.

TV Guide released five teases for the new season, which gave away some tidbits we can’t wait to see. (Full disclosure: TVGuide.com is owned by CBS, one of The CW’s parent companies.) According to the article, there will be:

Within the first 5 minutes, a character will join one of the show’s couples for a night of champagne-filled fun in the bedroom. Any guess who’s involved? The show is staying tight-lipped. We’re thinking Rebekah and Matt. When in Rome, right?

Either that or Katherine. Maybe her bubble bath in Damon’s tub leads Silas to bait her into trouble. That could be interesting.

2. Not one, but two steamy bubble baths

OK, we know Katherine is one. Check. In the promo, Silas, pretending to be Stefan (Paul Wesley), catches her in the bath and tells her human looks better on her than he would’ve thought. But who’s got dibs on the second? Apparently, neither result in the expected relaxation. In fact, TV Guide.com spills that the scenes will have somber and scary endings. Yikes!

Ugh, who could they possibly kill off next?! The deaths are always unexpected and they are never characters we’re OK with letting go. (I still wish Alaric would come back!) The nice thing is, characters do tend to make appearances even if they’re dead. Uh, last season was a shinning example of that. As if you need anymore evidence: take Lexi, who’s been a recurring character throughout the seasons even though she’s long dead. And Bonnie will be taking a big page from that book this season.

Not sure how we feel about this one. We like him bad and reckless. It’s endearing. Domestic Damon (Ian Somerhalder) might not be as fun. Though it could be cute to watch him try to win the title of World’s Best Boyfriend. We’ll reserve judgement, especially because TV Guide shared Damon and Elena (Nina Dobrev) will be *ah-hem*, you know. A lot. What we mean is, Damon hasn’t lost all his charms.

Silas is picking up what Damon is dropping. By that, we mean there’s a new bad boy in town. The show is great at making us fall for the villain. Still, we’re guessing Silas might be a little lot worse than Damon ever was. He seems out for revenge, which is never a good sign. I wonder how long Stefan will be sitting at the bottom of that lake?

The Vampire Diaries Season 5 premieres Thursday, Oct. 3, on The CW.