The finale season of How I Met Your Mother has begun. We laughed. We cried. We swooned. And… we laughed some more. 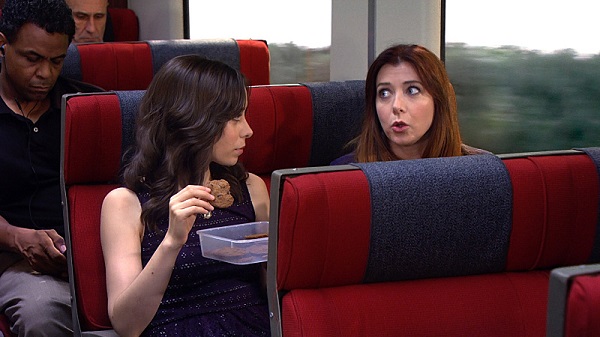 After eight amazing seasons of How I Met Your Mother, Season 9 kicked off tonight with, quite possibly, the sweetest episode ever. During the Season 8 finale, we saw our first glimpse of The Mother (Cristin Milioti) and now, a whole summer later, we’ve finally gotten the chance to meet her. Boy, is she perfect for Ted!

Tonight, Ted, Barney, Robin, Lily, Marshall and The Mother fight to make their ways to Farhampton, Long Island… each with their own impediments.

Haaaaaave you met Cristin Milioti? We have! >>

Marshall (Jason Segel) is on his way back from Minnesota, after visiting his mother one last time before he and Lily (Alyson Hannigan) move to Italy. Except, will they even be going to Italy? While the longtime couple was separated, Marshall was offered a job as a judge in New York. He accepted without even talking to his wife. While waiting to head home, his mother posts a congratulatory picture on social media and, while trying to help her delete it before Lily saw, he ends up kicked off the plane that was supposed to take him back to New York for Barney and Robin’s wedding. Oops!

Speaking of Barney and Robin (Cobie Smulders), the new future-weds find out they share a cousin — a Canadian named Mitch who built his own house using lumber from other people’s houses and who only has six fingers. After a long, stressful car ride (chauffeured by Ranjit, of course) full of telephone calls to relatives, they discover they aren’t actually blood relatives. Thank goodness!

Are you a Draper or a Mosby? Whose love life is most like yours? >>

Robin had another scare when the gang finds out Barney’s brother James (Wayne Brady) is getting divorced. Barney has always sworn that James’ marriage to his partner was the one example of a steady, healthy and awesome relationship in his life. He also thought James had broken the “curse” on the Stinson men. When it’s revealed that James cheated on his husband and that’s why the longtime partners are divorcing, Robin is surprisingly more devastated than Barney.

Bonus points: We find out Barney always puts together over-the-top romantic anniversary presents for his brother. Who said Barnicle can’t be a romantic?!

The bulk of the premiere episode’s importance lies with Ted, Lily and The Mother, however.

Lily and Ted start out their journey to Farhampton together, but Ted quickly ruins “Lil and Ted’s excellent adventure” by driving slowly, wearing his driving gloves and planning a million lame stops along the way. When it’s all too much, Lily abandons Ted and opts for the train, instead.

After a meltdown involving unicorn tears and loneliness from the absence of Marshall and Marvin, who should come to Lily’s rescue? The oh-so-sweet Mother, of course! The Mother is exactly what Lily needs. Not only does she come with sonab**** cookies, but also a sympathetic disposition that works perfectly for Lily’s fragile state.

Best yet, as we’re listening to Lily rant about Ted, we’re realizing some very important things about The Mother: She’s perfect for Ted! Just like Ted, she loves incredibly lame pit stops at historical sites and owns her own pair of driving gloves.

She’s no slow poke, though!

At the end of the episode we see two Teds sitting in the bar at the bed and breakfast in Farhampton. One is current Ted, obnoxiously doing the crossword. The other is future Ted and he’s with The Future Mother. It’s a year later and he’s telling her how a year ago to the minute, he was promising to bring her back to that very spot. And, because The Mother is awesome, we learn she finally broke Ted’s habit of driving like an old man by giving him an awful nickname: Lady Tedwina Slobsby.

Not gonna lie: This writer got teary-eyed on multiple occasions. The showrunners have set up Season 9 to, quite possibly, be the best one yet. We’re going to get the ending we’ve waited almost a decade for and we’re convinced that The Mother is really just the perfect mix of Ted Mosby’s four best friends. We can’t wait to watch it all play out… even if it also means we’re eking ever closer to saying goodbye.