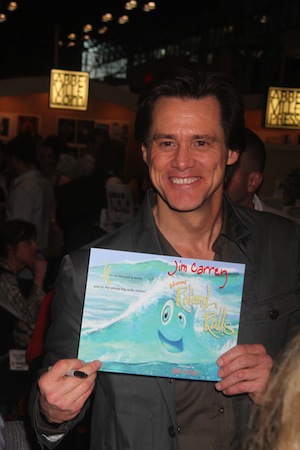 Comedian and actor Jim Carrey is adding author to his resume. He recently wrote a children’s book called How Roland Rolls. It hits stores Tuesday and deals with a pretty heavy topic. But don’t worry, it won’t terrify your little one. It will do just the opposite.

According to E! Online, Carrey says the story’s “about a wave named Roland who’s afraid that, one day, when he hits the beach, his life will be over. But when he gets deep, he’s struck by the notion that he’s not just a wave — he’s the whole big, wide ocean! It shows humanity’s interconnectedness through the metaphor of a wave in the ocean.”

Carrey pulled from his own childhood experiences to write the book. He reveals, “When I was a child my parents were smokers and I had a deep fear that they would die… and then what would happen to me? I think that’s a common fear for children — the fear of loss. It’s an early existential crisis, if you will.”

Carrey continues, “But when we realize that beneath the surface of things — the activities of our lives — we are all connected, all one energy, that fear of loss gets softened. At times, it disappears entirely. At least that’s been true for me.”

Jim Carrey refuses to promote Kick-Ass 2 due to violence >>

The actor believes stories are a great way to comfort children. Whether it’s to teach a lesson or make us laugh, they have a lasting effect.