Although Lea Michele hasn’t yet commented on the Cory Monteith tribute at the Emmy Awards on Sunday, she tweeted a message Monday morning that shows she is trying to be strong. 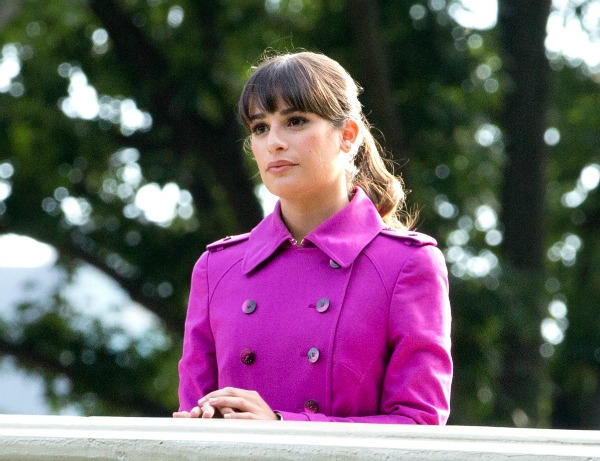 Lea Michele lost Cory Monteith in July and is working on living her life without him. The actress is proving to be the strong one, and is taking it one day at a time. The 2013 Emmy Awards paid tribute to Monteith Sunday night, and Michele woke up Monday morning with a message to her 3 million Twitter followers.

Michele hasn’t yet commented on the tribute, but she has been sharing her struggle and her life through Twitter.

“Rise and shine,” she said, along with a photo that said “No matter how you feel… Get up. Dress up. Show up. And never give up.”

The cast and crew of Glee is back filming, and co-star Naya Rivera said they are taking it one day at a time. On Sept. 10, Michele tweeted a photo with the cast of Glee back in New York.

Glee co-star Jane Lynch commemorated Monteith during his tribute, and showed how much she respected the actor. Lynch called him a “gifted and wonderful young man” who deserved all the respect he is being given. Monteith died in July at the age of 31.

“I was honored to be the one that they asked to remember Cory to the rest of the country,” Lynch told E! News after the Emmy Awards. “There’s a whole generation of kids whose lives have been enriched, and I’m really grateful to our show for that, and Finn Hudson and his openheartedness and inclusiveness is a big reason why kids love our show so much, and he’s gone.”

Glee will be honoring Monteith during this season, and Lynch is proud of the episode where they say goodbye to their friend.