Marvel’s Agents of S.H.I.E.L.D. premieres tonight and SheKnows was able to catch Ming-Na Wen (aka the tough, but sexy Melinda May) for a chat about the new show. 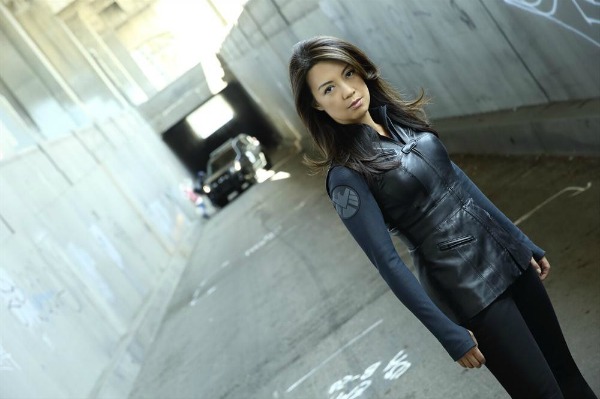 Even with the new fall 2013 TV season upon us, there are few shows out there that have fans worked up into a frenzy like Agents of S.H.I.E.L.D. has. Whether it’s because of its comic book roots, the fact that it is being created by that geek god known as Joss Whedon or just the amount of eye candy (both in talent and in the special effects) — people have been waiting anxiously for this series since the moment its inception was announced.

Finally, the big night is here and SheKnows was lucky enough to get the chance to talk to Ming-Na Wen (who plays the tough, sexy and mysterious Melinda May) about the new show, her character and just what it takes to get into shape for her role.

SheKnows: May’s very reluctant, to say the least, to get back in the field at first. Does that attitude change at all after the first mission?

Ming-Na Wen: I really do believe that May, she has such inner strength and she — you know, she’s a soldier. When she’s called to duty, she will be there. No matter what she’s feeling, she’ll put it aside. Ultimately it’s going be a slow process for her to address those issues, but she will be there for the task at hand. I think that’s kind of the real joy for me in playing her: The sort of slow revelation of who she is and what she’s capable of, and where her heart is at.

SK: Do you think that, had Coulson never shown up, May would’ve been happy to stay at her little desk with her paperwork? Or would she have one day sought out more action?

MW: I always really believe in any crisis that a person experiences, that you need that one person, that one really special friend, to pull you out of it. I think she was that traumatized, to where she [had]… not given up, but she’s resigned herself to the desk job. She feels like she’s still part of the SHIELD team, but just in a different capacity. It was really, truly Coulson who gives her that second chance. I think in all of our relationships with anyone — a friend, a family member who’s been down and out — they need that. We all need that special person to pull us out of it.

SK: Are we going to learn more about May’s past? Is there more to her than what we see in the pilot?

MW: Oh, there’s a lot more to her. My producers, they warned me, they said: “She’s going to be a slow reveal. You have to be patient with us, but there’s going to be a big payoff.” And I completely trust them, because every episode that we’ve gotten so far, it’s been another jaw-dropper, it’s another “Oh wow, how are we going to do this?” And it’s been an incredible ride with May, literally.

SK: It seems like there are levels of information, even within the team. Does May have any secrets that she is keeping from the rest of the team?

MW: Yeah, definitely. I think all of the S.H.I.E.L.D. agents harbor some secrets that they can’t reveal. I think that is going to be part of their job. In a weird way, whatever Coulson has experienced or is locking up — as much as Coulson saves May, I think ultimately that the team he put together, eventually that’s going to come back to be good karma for him. I think there’s going to be places where we each help each other out.

This is the new family that he’s put together, and while we have to learn about each other and figure each other out, it is about definitely helping and protecting — and going on these incredible missions while we’re there.

SK: What can people look forward to from the show as it continues its first season?

MW: People can look forward to a fun-filled adventure every week. Where you’re at the edge of your seat, where you’re laughing, where you’re going: “Oh dang, he looks good!” We’re going to have some eye candy for sure, for both the men and the women — it’s not just for the geek boys. There’s something there to appeal to our women fan base, and that’s huge, too.

It’s such great stories and it’s definitely an adventure and something amazing going on every week. It’s kind of great escapism and yet it’s all tied to the human experience.

SK: How much work did you have to do, and still do, to prepare and play May?

MW: Good diet is really important. I have my elixir of coffee and my juice every morning — vegetable juice with some fruit mixed in there. I do Pilates, I do aerobics and I’m on this show, where it runs me ragged. It’s great. We have really long hours and there’s a lot of action stuff, so we’re always keeping fit in some form or other. And every chance I get, I do my squats.

[I used to think] that my two kids gave me my flabby tummy and they gave me an excuse, but in reality you just need to do more sit-ups. I’ve been using them as an excuse and I just needed to work out. Doggone it! It’s not them, it’s me. I have to work out more. But Pilates, I am a true fan of it, those little muscle movements — you don’t think it’s going to do anything to you and, boy, it does a lot. It really, really, does. I really recommend it.